Retrieving the Horns of Ice
The Molten Cave, also known as Flame Cave, is a location in Final Fantasy III found on the northwestern end of the Floating Continent. It holds the Fire Crystal and some parts of the floor are covered with molten lava, thus, the party will take damage as long as the characters are submerged in it.

After Gutsco the Rogue steals the Horns of Ice he heads to the Molten Cave to corrupt the Fire Crystal and absorb its power. The Warriors of Light chase him and defeat him as Salamander. After saving the Crystal, it grants the Warriors new jobs.

The Warriors of Light make for the Molten Cave to settle the score with Gutsco, the thief who stole the dwarves' Horns of Ice.

The background music that plays inside the Molten Cave is called "The Altar Cave". A remixed version of the track appears on the Chocobo Racing Original Soundtrack album, called "Behemoth's Theme". 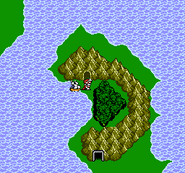