Officially known as the Military Operation Organization/Guidance Logistics Expert (or "MOOGLE"), ze provided crucial support for Class Zero during the liberation of Akademeia. One of the youngest moogles at the school, ze did not belong to a particular group of cadets until Class Zero showed up, at which point the administration selected hir for the job.

Moglin, real name Hatzkhaminei Lowtoyosna Eripulci (ハッツミカミネ・ロウトヨウスナ・エリプルチ, Hattsumikamine Rōtoyōsuna Eripuruchi?) and also called Mog during missions, is a supporting character from Final Fantasy Type-0, and one of the thirteen moogles that make up the Cranberry Knights at Akademeia. Moglin is assigned to Class Zero to oversee course arrangements, mission guides, communications, and daily domestic works, such as laundry and meals. Ze was given hir nickname by Cinque due to hir real name being too long. During free time speaking to Moglin in the Class Zero classroom allows the player to attend class to gain stat boosts in exchange to hours spent before the next mission. When the class is stationed outside of Akademeia, Moglin allows the cadets to use the Arena for combat simulations.

The pronouns "ze" and "hir" are used when referring to Moglin in the Rubicus, and hir gender is never explicitly specified.

Moglin is a white moogle with a head bigger than hir body. Ze has a large pink pompom with a clockwork wheel around it, small round ears, a large pink nose, closed eyes, and small purple bat wings that allow hir to fly. Moglin wears an Akademeia uniform that resembles the one worn by Class Zero cadets, albeit smaller and less detailed.

In hir artwork Moglin brandishes a rapier, but doesn't wield a weapon in-game.

Moglin is friendly and loyal to Class Zero. Ze is somewhat of a pushover, as despite not agreeing to be nicknamed "Moglin", ze accepts the name when the cadets start calling hir such. Moglin is always ready to encourage the class during missions, providing status updates from the circumstances on the battlefield. Moglin follows the cadets' progress keenly, and rewards them in numerous accounts when ze sees the class members striving for improvements, such as when they accomplish their first task.

Mog helps Class Zero over the COMM during Capital Liberation, but hasn't introduced hirself to the cadets yet. After it is decided the cadets are to move into Akademeia, Moglin asks them over the COMM to meet at classroom zero.

Mog is introduced as the class moogle when the cadets are registered to Class Zero. Ze gets nicknamed "Moglin" by Cinque due to hir real name being so long and hard to pronounce. Mog rejects the nickname, but the cadets begin calling hir such nevertheless. Moglin stays in contact with the class over COMM and is ready to give them encouragement and advice. Ze stays in the classroom and is ready to commence class when the cadets are not out on missions.

During the Code Crimson mission to recover classified documents from Togoreth, Moglin helps the cadets report back to Dominion HQ about the killed civilians they failed to save, and confirms a phantoma researcher's identity for King when asked. When searching through the databases, hir pompom glows red. When the cadets are stationed at Ingram, Moglin comes along alongside Aria.

After the Militesi Empire and the Kingdom of Concordia form a coalition the Dominion of Rubrum is forced to wage war on two fronts simultaneously. Kurasame Susaya and Class Zero are sent to the western front to face the empire and Moglin accompanies them. Kurasame perishes, giving up his life force willingly for Lady Caetuna to summon Alexander to annihilate Milites while Moglin and Class Zero evacuate.

Back in Akademeia the cadetmaster visits the class and announces that due to its unique nature Class Zero is not assigned a new commanding officer. The cadets wonder who will give them mission orders from them on, and Moglin announces ze can take over the role of giving briefings. The cadets tease Moglin by ignoring hir and ponder if they can just rely on dominion tribunes and Central Command. Moglin gets depressed, but King and Deuce assure hir they were joking, and would be glad to have Moglin as their new "commander."

After Orience is united under Vermilion Bird's banner, the cadets return to Akademeia from the battle at Ingram, but find its cadets and legionaries slain by the Rursus and the dominion commanders gone: Tempus Finis has begun. Other cadets reveal the once covert operations known as Code Crimson, performed by Class Zero, prompting the remaining cadets to turn against them, blaming them for the ensuing apocalypse. Rem's illness reaches its final stages and she collapses. Arecia Al-Rashia, the class's "mother", tells the others the cadets have lived their lives according to the Will of Crystals recorded in the Akashic Records, and hints at a vital decision the cadets would soon need to make.

Moglin retreats to classroom zero with the others, saying ze can't find Machina, but that Rem should be safe at Arecia's office, although they are unable to rouse her. Moglin is sad that as Tempus Finis is upon them, ze and Class Zero would soon have to say goodbye. Moglin says it was an honor serving the class and hopes ze had made the cadets' time at Akademeia easier. It is unknown what happens to Moglin after the cadets depart to Pandæmonium without hir, as when they return to the ruined classroom zero to spend their final moments together, Moglin is gone.

Missions are quests that provide the game's core gameplay. Missions generally consist of a sequence of battles as Class Zero reaches their goal. Moglin accompanies the class to the missions and helps the player by suggesting what to do next or otherwise informing them of what is happening. Moglin stays in wireless contact via COMM.

Lectures are optional events in Akademeia to pass the downtime in between missions. Attending lectures will award stat boosts to every member of Class Zero. Lectures cost two hours of free time and can be attended by talking to Moglin in Classroom Zero.

Moglin doesn't appear in person, but Cinque occasionally sings a song with hir name. On her Lost Chapter she calls Mog Moglin much to his confusion.

Moglin appears on a Triple Triad card in the version playable via Final Fantasy Portal App.

The Moglin and chocobo mount (

) from could be obtained as a courier and ward respectively as pre-purchase bonuses for Final Fantasy Type-0 HD Steam release.

Moglin is voiced by Sumire Morohoshi in the Japanese version.

Ze is voiced by Ariel Winter in the English version.

Moglin with a rapier. 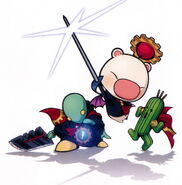 Moglin with Tonberry and Cactuar.