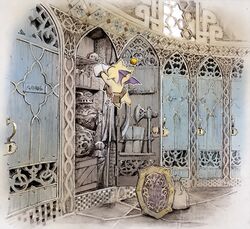 "Mog House" is a theme from Final Fantasy XI. It was composed by Naoshi Mizuta.

"Mog House" is the eponymous theme of the location that every character can access through entrances in the four cities. Though the players can also access their Mog House through Nomad Moogles, the theme is not played when doing so. It is the 18th track of the 2nd disc of the original soundtrack.

An arrangement of "Mog House" plays on the StreetPass and ProfiCard Design menus.

"Mog House" is arranged for The Star Onions album by Kumi Tanioka. It is the 6th track of the album.

A chiptune arrangement of "Mog House" appears in this album. Arranged by BOKKADENcI, it is the 6th track of the album.

Two arrangements of "Mog House" were played at VanaFest 2012: one by Kumi Tanioka, and one by The Nanaa Mihgo's, Naoshi Mizuta's band.