The Mog House is a one-room apartment that has been set aside in the residential areas of each nation for the sole use of adventurers in Final Fantasy XI. Becoming an adventurer entitles one to a Mog House, and players are free to furnish the rooms as they please. Furniture usually adds extra storage space and fills the Mog House with an elemental aura, resulting in special traits called Moghancements. All rental fees are subsidized by the four nations as a part of the conquest policy taken up after the Crystal War. All Mog Houses come equipped with a Mog Safe.

A Moogle is present in each Mog House, having been dispatched by the Mog House Management Union (MHMU) to support adventurers by dealing with the matters of each individual Mog House. The Moogles' jobs include managing the renters' goods, upkeep of the room, taking care of plants and various other required services.

In addition to Mog Houses, Rent-a-Rooms are available for adventurers who travel far from their home nations, and are currently available in all major cities, as well as military barracks in Shadowreign era cities. These fully equipped rooms are also offered free of charge.

Up to 17 guests can be invited into a player's Mog House by having the 'host' player speak with their Moogle and selecting the "Open Mog". The 'guest' party members then speak with the NPC located immediately (formerly the Room Renter NPC) outside of the Residential Area, selecting to enter a party member's Mog House, then selecting the hosting player's name. Guests are ejected from the host's Mog House if the player chooses "Close Mog", leaves their Mog, or disconnects from the game.

Aht Urhgan also contains a Mog Locker that the adventurer can obtain for a small weekly fee and expand to All-Area Accessibility.

Upon entering the Mog House (or a Rent-a-Room), all Hit Points and Magic Points are replenished. Slip (Helix) spell effects are removed. Magic recast timers are reset to zero. Curse is not removed.

The Mog House's eponymous theme plays whenever a player is inside. Accessing a Mog House via a Nomad Moogle does not trigger the song, however, and the song of the area will continue to play. 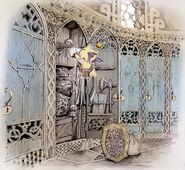