Everybody's favorite fuzzball with the funny way of talking, kupo. But don't mistake this particular pom-pom-parader for your average moogle.

Mog is a minor character in World of Final Fantasy. Mog is a recurring name for a moogle in the series.

Notes: Plundering pirate / Avid reader / Told the twins about the keys in the prophecy

A Series Regular
Since their first appearance in a FINAL FANTASY game, the moogles and their trademark "kupo" have gone on to appear in a number of stories inside and outside the FF universe. They're something of a mascot.

In FINAL FANTASY VI, moogles popped up on a black screen to provide players with hints. That seems to have cemented their role in FF history as guides and purveyors of various player-friendly services.

In our tale, Mog conveniently shows up to tell the twins about the keys they need. Does that make him a "deus ex mogina"?

Transfig Fashion
So, you may be wondering if a kupirate is just a regular moogle in fancy clothes. Not so! Just like with any other Mirage, Mog here is able to transfig in and out of kupirate form. It certainly helps him save on closet space.

Moogle Mischief
Most moogles you'll meet are unrepentant pranksters, and this one's no different. Playfulness appears to be built right into their pom-poms.

Old Friends
Mog, the Cactuar Conductor, and the Master Tonberry go way back. In another time and another place (okay, actually another game), they were originally going to team up as the "Cranberry Knights." Sadly, due to unavoidable circumstances, that particular tale had to go untold. Their personalities, however, live on in their adventures in Grymoire.

In the Miniventure "A Duo of Three," Cactuar Conductor and Mog come to the aid of Master Tonberry in the Coliseum. Both Cactuar and Mog decide to address Tonberry with new nicknames, much to his annoyance. 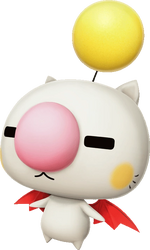 Mog can be fought and imprismed at the Coliseum and goes by the name "Master Moogle".