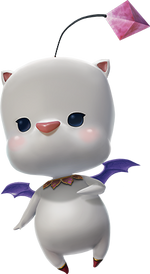 One of the moogles who make Palamecia their home.
He feels indebted to Wol after the events of their first meeting, and offers to guide him on his travels. Moogles in Palamecia share a collective memory: All moogles experience everything that each single moogle sees, feels, or learns.

Mog (モグ, Mogu?) is a non-player character in Mobius Final Fantasy. Mog is a recurring name for a moogle in the Final Fantasy series.

Mog is a model edit of Mog from Final Fantasy XIII-2 with feline eyes, cat-like nose, flower-shaped collar, and sock-like objects on his feet.

Mog is a cheerful moogle, looking highly upon Wol. He greatly believes in the prophecy, doing whatever he can to make it happen.

As Wol and Garland are on the road after a wave of Blanks arrive, they spot a moogle who is under monsters' attack. Then the armor-clad man pushes Wol into helping the creature, citing the law of Palamecia. Man saves the moogle from death for which the creature is very grateful. As a sign of thanks the moogle introduces himself as "Mog" and decides to join Wol on his journey, calling him "Master". During one of their stops, Mog says that Wol should go to the Runic Temple and receive a blessing there. Inside the Temple's crystal room, the confused man approaches a floating blue crystal and Mog encourages him to touch it. An image of a woman appears within the crystal and the moogle introduces her as "[their] beloved Princess Sarah". Speaking highly of Wol's feats, a violet glyph appears above the man's head and the princess says she can feel his strength. Mog then excitedly tells her about how he was saved by Wol and the woman cites a fragment of a prophecy regarding the Warrior of Light's moogle companion. With Wol's agreement to become the fabled savior of Palamecia, the princess grants him with the boon of House Cornelia. Then the woman's image disappears and Mog explains that she is in a faraway place, but the crystal's magic allowed her to see him and bestow upon him a gift, which he clarifies to be teleporting.

After the two leave the Temple, Wol mumbles something to himself and Mog turns to ask him what is it. When he is later asked by Wol about Echo, the moogle explains that they are field fairies who lead travelers to their doom and when once attach themselves to someone they won't let go of them. On their way to Castle Cornelia, they meet Garland who warns Wol about the princess, but Mog cuts it and says not to listen to the knight as he is a heretic. As the Blank and the moogle start talking about the prophecy and the princess, Garland grabs the creature and tosses him aside preventing him to speak about Wol and Sarah involvement in it. When Wol and Mog make it to the Castle, the moogle shows his Master the portrait of Sarah and the man comments about its old looks. Wol starts to act strange and Mog asks him what's wrong, but the man just brushes it off and decides they should continue with their journey. The man uses the teleport stone in the back of the Castle, and he along with Mog are teleported to the Ishtar Desert.

When they arrive at the desert, Mog tells Wol about an old Palamecian legend according to which royals where driven away from their castle and traveled the sands of the desert struggling to survive, yet that struggle made them stronger. Using the legend, the moogle encourages his Master to also travel the desert and get stronger, but Wol comments on it being not a very smart idea. Then Mog frantically starts to spin around him and when asked what's wrong, he admits it is a first time for him to be in a desert but is not worried and once again calls on the prophecy saying they need to find the Runic Temple and receive the blessing from its crystal. As they travel, Mog recalls hearing about keys hidden among the sands. With Mog's help, Wol finds a key in the Temple Fringe and when asked about the prophecy he states that according to it he needs to find four keys in order to gain access to the Runic Temple. Wol comments on how quick such a specific information came to the moogle, and Mog explains that as all moogles have a common mind they share their experiences and knowledge with each other and encourages his master to ask him questions.

As they continue their search for routes to other ruins, Mog worriedly asks Wol if he is his friend which the Blank assures him he is. Mog also asks him to remember him, and when his Master agrees to it, much to Wol's own suspicion, the moogle is joyful and quickly drops the topic. After finding three keys, Mog teases Wol about a big Blank gathering which he think his Master will enjoy, but doesn't specify what he exactly means by that. As they travel in their search for the fourth key, Wol meets a couple of Blanks who reveal to him that the Wol Namesgiving Tournament where Blanks fight for the right to claim the name "Wol" and say that the main prize for winning it is a key to the Runic Temple.

During the journey through the Runic Temple, Wol and Mog come across a Lich enemy several times. After each defeat, Mog alludes that a friend is supposed to protect the Warrior of Light in battle. In the third fight, Mog even attempts to fight, but Wol pushes him aside, continuing the fight. After the the fourth and final battle, Mog insists that he delivers the final blow. Wol agrees aloofly. Mof then flies into the Lich in a killing blow, but is hit by the Lich in return collapsing to the ground. Wol, initially thinks that Mog just took a hit, but notices his pom-pom losing its glow and picks up Mog in worry. Mog wakes up weakly and confesses that he was supposed to sacrifice himself so the key could reveal himself to the Warrior of Light as told in the prophecy.

Wol tries to deny this saying no key is around telling Mog to get up. The key appears, confirming the prophecy to Mog's happiness. Mog is happy that this meant that he is considered a friend to Wol and he will always be a friend to the moogles. Wol accepts this but asks that Mog keeps some of this happiness for himself. Mog says he can't since it's a law of Palamecia. As a final request, he asks Wol to hug him, Wol complies and embraces the moogle. Mog is so happy that this is something he can keep for himself bragging that the other moogles would be so jealous. Mog then dies in a flash of light and the light dissipates into bubbles into the sky. Wol punches the ground in grief for his fallen friend.

Model.
Add a photo to this gallery
Mobius Final Fantasy
Retrieved from "https://finalfantasy.fandom.com/wiki/Mog_(Mobius)?oldid=3305680"
Community content is available under CC-BY-SA unless otherwise noted.