Final Fantasy Wiki
Register
Don't have an account?
Sign In
Advertisement
in: Characters in Chocobo Racing, Characters in the Chocobo series, Moogles
English 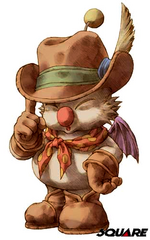 Mog (モグ, Mogu?), also called Atla (アトラ, Atora?), is a recurring character from the Chocobo series and is the most famous moogle in the series. He always attempts to steal the limelight from Chocobo, the series' main protagonist, though Chocobo mostly ends up foiling his plans. Nevertheless, Mog sticks with Chocobo and the two are fast friends.

Mog is a greedy little moogle who jumps at the chance of hoarding treasure for his own. Whenever he travels in an adventure with Chocobo, Mog will always cook up a plan behind the bird's back for his own gain.

Atla travels with Poulet to a village. After helping Poulet save a chocobo villager from an evil crystal that possessed him, Atla himself is possessed. He is later saved by Poulet and Chubby Chocobo, who proceeds to destroy the crystal.

Mog travels the world with Chocobo as treasure hunters who explore dungeons around the world. Mog is egoistic and is always looking for a way to surpass Chocobo. He has high HP growth and his physical attacks are average. He can sometimes steal items from enemies whenever Chocobo doesn't have any in his inventory.

Mog had commissioned Cid to create a racing machine to beat Chocobo in a race, but Cid had forgotten all about it; partly because the inventor was busy inventing Jet-Blades for Chocobo. Mog got his racing machine; a scooter with custom-made Moogle horn, and challenges Chocobo to a race, only to be beaten. Cid explains to an angry Mog that the Blue Crystal on Chocobo's leg helped Chocobo win, and that if they travel together around the world, they will surely find other Blue Crystals. Mog jumps at the chance and joins Chocobo.

Mog's ability is "Flap", which allows him to fly over obstacles for a limited amount of time. He drives the Mog-Mobile R2, which is a bit easier to handle than Chocobo's Jet-Blades.

Mog is just an ordinary moogle. However, he has delusions of grandeur, and likes to dress up as his alter ego, "Dueler X" (ポップアップヒーロー, Poppu Appu Hīrō?, lit. Pop-Up Hero). As Dueler X, Mog believes he is the greatest card battler ever, and teaches Chocobo how to play cards and gives him decks to work with. Everyone knows that Dueler X is really Mog, but Mog cannot accept this.

Mog assumes five alter egos; Dungeon Hero X (ダンジョンヒーローX, Danjon Hīrō Ekkusu?), Pop Up Hero X (ポップアップヒーロー, Poppu Appu Hīrō?), Merchant Hero X, Romantic Hero X, and Robber Hero X. Four of Mog's alter egos give Chocobo help on his adventure in different way. In a book that can be found in the empty house after the game's ending, it is said that Mog was found almost dead by Shirma's mother, Elena, on Christmas Eve. Mog asked Elena to cast a spell on him, to make him stronger and unbeatable. Elena answered that she didn't know such a spell but promised to give him a present. The day after, Mog found his purple mask under the Christmas tree sewn by Elena who told him to became a super-hero thanks to it. This is how Dungeon Hero X was born. 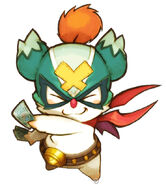 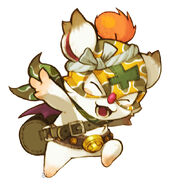 Mog appears as Cid's friend. Because of this friendship, there's always a moogle in each of Cid's Alvancia picture books.

This section about a character in Dice de Chocobo is empty or needs to be expanded. You can help the Final Fantasy Wiki by expanding it.

In the English version of Final Fantasy Fables: Chocobo's Dungeon, Mog is voiced by Brina Palencia. In Chocobo's Mystery Dungeon Every Buddy!, he is voiced by Cristina Vee.

He is voiced by Kumiko Watanabe in the Japanese version.