Cid Pollendina: Oh, shut up and help me remodel the Mobreeze Airship Factory page!
Please expand this article into a full one. The following tasks need to be completed:This request can be discussed on the associated discussion page. Remove this notice upon completion.

"To Each His Own"
Mobreeze Airship Factory is a location in Final Fantasy Brave Exvius. Located at the lowlands between the Windy Heights East and the Junkyard near the east coast, it is currently a decommissioned facility.

The Mobreeze factory was built long ago. Though mainly meant for airship construction, a room was decorated with the portraits of all the Cids back to the founder, thus totalling fifteen generations. In there were also hung up the paintings done by the mysterious artist Melete that record the process of the first-ever airship built in Lapis, a joint work between the first Cid and the dwarves led by General Nagflar.

Mobreeze was decommissioned and abandoned a long time ago however, as its duties were all taken over by the shipyard in Industrial City Dilmagia, but technicians are allowed to watch up close. In her childhood Lid and her brother Evan went to the factory often, and dreamed of becoming a Cid themselves.

The party comes to the factory led by Lid; she assures that if they cut straight the factory, they will come ahead of their enemies at the Wind Shrine. They briefly visit the portraits' room. The party soon finds out that an airship is there despite the factory being decommissioned; the airship bears little resemblance to others they have seen and is being worked on by dwarves whom Lid is unable to recognize. She asks of them, who tells her he is there working on the Invincible for the sake of "that great man". The security system's red alert starts to sound as the party is trespassing, and the dwarf advices them to flee right away.

They promptly do so, but they are greeted by Lid's brother, Evan, who has come to see the intruders. He realizes it is them who are causing much trouble for 'Lord Veritas' and says he won't let anyone interfere with his plans. He calls a Guardian to attack them. Mechabo protects the party from his laser beam and is destroyed, and Lid vows to punch Evan for Mechabo's destruction. As the Guardian is still standing, the party escapes on a mining cart and ends up at the Junkyard.

Party of 3 or less (Companion included)

The dungeon uses the usual battle theme "DUEL!!" and boss theme "Onslaught" for the first four stages and the exploration, which plays the track "Antiquities" as its field theme. The 'Escape' stage, however, uses the NES version of the track "Protect the Espers!" from Final Fantasy VI. 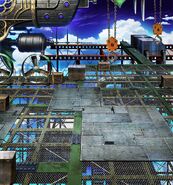 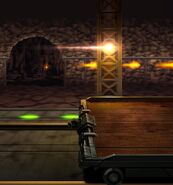 The first Cid's portrait, titled "He Who Soars the Heavens".