Some time prior to the events of the game, an Imperial soldier from Maranda attempted to desert when he learned the Empire was intending to attack Doma, but he was caught and brutalized. The soldier reached Mobliz, but his wounds did not improve and he was weakened to the point of being totally bedridden.

Sabin and Cyan arrive at Mobliz after leaping down Baren Falls to escape under Imperial control. Learning about the wild child Gau that lives on the Veldt with monsters, they use some Dried Meat purchased at the village to win his trust. Gau showed them where he had hid a diving helmet stolen from Mobliz that the two could use to swim through the Serpent Trench to Nikeah.

When the world was destroyed by Kefka, he turned the Light of Judgment on Mobliz. The town was decimated and almost all of the adults perished protecting their children: the eldest survivors, Duane and Katarin, are only teenagers. An unspecified time after, Terra arrived at the town and began to care for the orphaned childrn, many of which came to see her as a surrogate parent and call her "mama".

A year after the apocalypse the party finds the ruins of the town and ask Terra to join them on the search for the other missing Returners to defeat Kefka. Terra, undergoing a personal revelation about her feelings for the children, refuses. The demon Humbaba attacks the town, and when Terra is wounded fighting him, the party intervene to chase him off. Considering herself useless in battle Terra remains behind to care for the children as the party leaves. One of the children gives them the magicite Fenrir as thanks for battling Humbaba.

Once the party has acquired the airship, Falcon, they can return to Mobliz to discover Katarin is pregnant, stressing Duane. Humbaba attacks again, and this time Terra trances and helps the party fight him off. Now understanding she has come to love the children, Terra rejoins the party to defeat Kefka and create a better world for the kids to grow up in. Duane and Katarin remain behind to care for the village and tend to Katarin during her pregnancy.

After Kefka is defeated at Kefka's Tower, Katarin gives birth to her baby in Mobliz.

Mobliz's relic shop in World of Balance (top), and the survivors' underground bunker in the World of Ruin (bottom).

Mobliz hosts an inn on its southern edge and a joint weapon/armor shop nearby. A small item shop is nestled into a hill on the northern side of town. On this hill, a large house is where Mobliz cares for its carrier pigeons, their only means of communication with the outside world. A nearby house holds a wounded imperial soldier, and on a hill behind these homes is a cropfield and a relic shop.

In the World of Ruin, Mobliz is in ruins due to the Light of Judgment. The town has either been sunken or flooded and its lower buildings are gone or inaccessible due to water, leaving only the relic shop, mail house, and the house of the wounded soldier. The basement of the mail house has been cleared out and contains a door that leads to an underground cavern where the children of Mobliz live. The house of the wounded soldier also contains an underground area, located through a secret entrance behind a bookcase.

South of Mobliz in the World of Ruin, in a forest, is a chocobo stable.

In the World of Balance, Mobliz lies on the Veldt, which has unique mechanics related to which monsters can be encountered. The enemy formations below are the encounters in the World of Ruin; with the exception of Humbaba, these enemies are universal to terrain along the Serpent Trench.

In the World of Balance, an Elixir is hidden in the clock in the mail house. Sending letters for the wounded soldier eventually rewards a Tintinnabulum In the World of Ruin, a Phoenix Down is inside a barrel near the house the wounded soldier was in, and in the hidden basement of the same house there is a Hi-Ether in a pot. When the player defeats Humbaba on their first visit to Mobliz, they receive the Fenrir magicite.

When Sabin and Cyan first arrive on the Veldt, they must recruit Gau to leave the region. Mobliz' item shop sells an item called Dried Meat, and when used on Gau when he appears at the end of a random encounter, it will trigger a scene where he joins the two and gives them a directive to go to Crescent Mountain Cave.

In the World of Balance, Mobliz houses a wounded soldier who escaped from the Imperial army. The player has the option to pay 500 gil to send letters to his girlfriend Lola in Maranda. To receive a reply, the player will have to sleep at the inn or talk to the man outside the mail house and view a cutscene where he describes the Serpent Trench. Afterwards, a reply will be found on the desk in the soldier's house. If the player does this five times, the soldier thanks them for their help with a Tintinnabulum.

The party receiving the Fenrir magicite during the first visit (top), and Terra's final battle with Humbaba (bottom).

In the World of Ruin, on the first visit to Mobliz the party will be stopped by guard dogs as they enter town. In the hidden basement of the mail house, the party finds Terra and speaking to her initiates a cutscene. When the party leaves after it ends, the player fights a scripted battle between Terra and Humbaba. Humbaba is immune to damage, and when Terra is eventually KO'd the player will fight Humbaba with their own party until he flees. After a cutscene, the player will receive the Fenrir Magicite.

After the player acquires the Falcon, they can return to Mobliz and enter the basement of the house of the wounded soldier to find Terra and Katarin, and a fight with Humbaba ensues after. When he is weakened he will blow two random party members out of the battle and the battle will restart with Terra joining, permanently in Trance. When Humbaba is defeated, Terra will rejoin the party.

The first visit to Mobliz can be done at the start of the World of Ruin with Celes and Sabin, but the second visit will not trigger until the player has the Falcon. 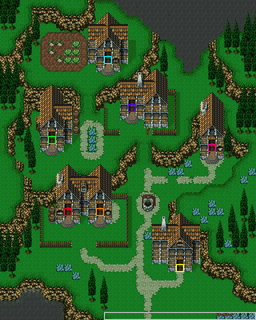 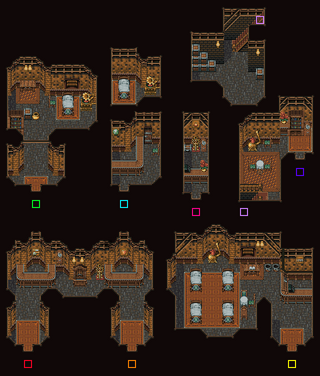 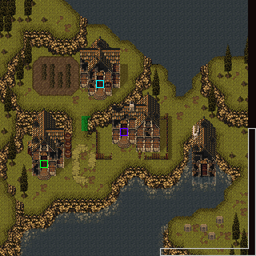 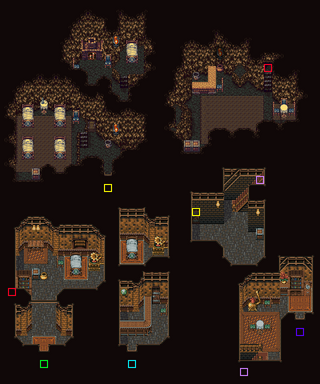 Mobliz is the setting for two regular dungeons and is also featured in the Challenge Events Touched by Magic and Assassin in Black.

Celes washes ashore near Albrook and learns from the townsfolk that Sabin is in Tzen, and Terra is in Mobliz. 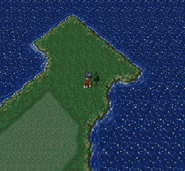 Mobliz on the World of Balance map (SNES). 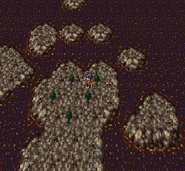 Mobliz on the World Map of the World of Ruin (SNES). 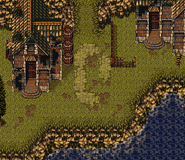 Mobliz on the World of Ruin (SNES).

Mobliz in the World of Balance (GBA).

The kids of Mobliz (GBA).

Mobliz in the World of Ruin's World Map (2014 mobile/Steam).

Mobliz in the World of Balance (2014 mobile/Steam).

Shelter in Mobliz in the World of Ruin (2014 mobile/Steam).