Various
The Moblins are a tribe of Goblins, so named because, while Goblins have never organized themselves and created any sort of organized civilization, Moblins banded together in a mob to dig the tunnels of Movalpolos. Most Moblins are troglodytes, preferring to live in the darkest parts of Vana'diel. Yet, there have been a few that have ventured out of Movalpolos, their subterranean city.

The Moblins are known for their exceptional smithing and alchemy skills. Their achievements include complex drilling apparatuses and floodlights, as well as several advancements in exotic fields such as bionics. It is even rumored that their ability in these areas matches or exceeds that of the scientists in the Republic of Bastok.

A faction of Moblins that sprung from Movalpolos are the current employers of the Troll Mercenaries in the Halvung Territory and the rest of the Near East. Known as the Halvung Moblins, their leader is the mad scientist known as Megomak. 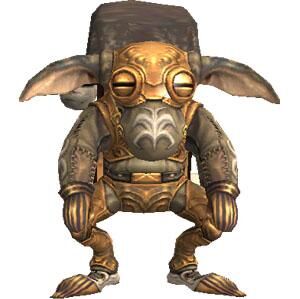