iOS, Android, Steam
Mobius Final Fantasy, titled early in development as Mevius Final Fantasy, was a free-to-play role playing game for iOS and Android, produced by Yoshinori Kitase.[1] The game is said to take the "classic road" with features like map exploration–although moving across the map will be automated–tactical battles, and a leveling system. The game focuses on Wol. The scenario is written by Kazushige Nojima and is said to be on par with a numbered game, featuring refined plot twists. Since the game has the Warriors of Light as a theme, it pays homage to the first Final Fantasy with inclusion of a variety of references to it, but it is not a remake and has a new story and setting.

Mobius Final Fantasy uses a hybrid turn-based card battle system. The player assumes control of Wol or one of his allies in a series of first-person battles against waves of enemies. The player must set their chosen warriors' skills as decks of cards, the first being the warrior's job that determines their base stats. The remaining four cards determine their abilities and any stat bonuses to be applied on top of the base job. As the player attacks physically by tapping anywhere on the field, they will draw element orbs from the enemy to fill a drive gauge. Each card in a warrior's deck will draw a set number of orbs from the drive gauge to use its indicated ability; or, the warrior may draw orbs in to create a shield, halving potential damage from the element drawn in. As the player advances the story, they will earn the ability to set two concurrent decks to use in battle and to freely switch between them, including the ability to call an ally for one action per turn if different allies are set. As the player gains experience in battle, they earn more base stamina along with the ability to set more decks in their personal selection queue. Each main story chapter cleared also raises the per-rarity-rank cap on the player's card levels.

Enemies have varied strengths and weaknesses as well; for instance, using a fire-aspected ability on an ice-aspected enemy will deal extra damage. Each enemy also has a Break gauge that, when depleted, stuns the enemy for multiple actions within the span of a turn. While a foe is broken, the warrior will be able to deal much more damage per individual action than they otherwise normally deal, akin to the Stagger system of the Lightning Saga.

As is tradition in Final Fantasy games, winning a battle may yield various kinds of loot including skillseeds based on the primary deck, common cards, magicite, and skill coins. Treasures may also be obtained after clearing specified areas. Any EXP gained is distributed across all active cards, with the warrior's effective level as the sum of all ability card levels.

Travel between battles relies on a network of fixed routes and nodes. The player can only move one space at a time so long as a path is available. Clearing larger nodes in a given area, however, will flag the nodes as teleport points, allowing for faster travel. The player may also skip an adjacent node at any time by collecting Warp Shards, which yield small amounts of EXP, gil, and other loot.

There is a summon system where the player can use eidolons, such as Shiva, Onion Knight and Fat Chocobo as abilities.

Multiplayer Mode was introduced in the Japanese release in February 2016 along with the announcement of Final Fantasy Record Keeper collaboration.

This world is not your home,
For you hail from elsewhere.
All you have ever known is war.

All your memories have vanished.
You've drifted without them to the land of Palamecia.

There are many outsiders here like you.
With your past erased from memory, they have begun to call you The Blank.

Though you have lost your past, you may still hold the future.
In Palamecia, there is a prophecy:
"When despair enshrouds the world, a Warrior of Light shall appear."

This world is under siege by the evil armies of Chaos.
In accordance with the prophecy, a hero with no past will arise to save the world.

Among the blankers, there is one, perhaps even you,
Who will emerge as the legendary Warrior of Light.
Fight for the future, Blank, and bring hope to Palamecia.

During the Famitsu interview with Sakaguchi and Kitase where Mobius Final Fantasy was unveiled, Sakaguchi was impressed with the game's graphics and asked Kitase if the player can zoom in on the world map. Kitase replied that currently that was not possible, but Sakaguchi urged them to add the feature, as well as a moon. Kitase argued that if the game has a moon players will want to go there and Sakaguchi retorted that being the point.[7]

The interviewer suggested Kitase and Sakaguchi do a collaboration of Sakaguchi's Terra Battle and Kitase's Mobius Final Fantasy. Both were on board with the idea.[7]

For a smartphone game the staff for Mobius Final Fantasy is bigger than any previous title of that sort and it is mostly developed in-house. The staff consists of people who work on the numbered Final Fantasy games. Mobius Final Fantasy is the first Final Fantasy mobile game of this scope, although parts of the illustrations and graphics are outsourced. Kitase explained that even though it is possible to make games like on dedicated game console also on smartphones, they didn't seem to exist and that's why they wanted to make one. He also added that players spend most of their gaming time on smart devices.[7]

Due to lack of interest, service to South Korea was terminated as of November 1, 2018.

Due to enforcement of earlier gaming laws in Belgium, Square Enix voluntarily withdrew Mobius from the country at the end of November 2018. The company expressed uncertainty over how existing statutes would impact mobile games' gacha mechanics.

On January 15, 2020, the development team posted a message in-game as well as on all social media platforms that it would be terminating service. The precise rationale behind the closure was not given, but the notice stated that the decision was made after several rounds of intense discussions. Following customary sunset protocol, it was established that Mobius would close permanently on March 31, 2020. As the global version was three months behind, all in-app purchases were terminated and the sunset period began on March 31, 2020. On June 30, 2020, service was discontinued in all regions.

Mobius Final Fantasy was released on Steam in Japan in November 2016. It was released worldwide in February 2017. 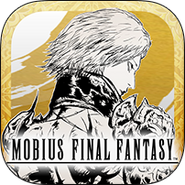 Sarah Cornelia trapped in a crystal. 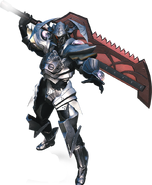 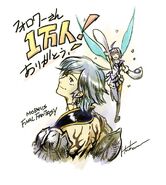 Art by Toshiyuki Itahana in celebration for 10,000 Twitter followers. 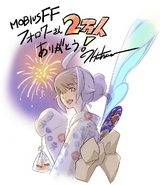 Art by Toshiyuki Itahana in celebration for 20,000 Twitter followers.

The game is named after the Möbius strip. The "8"-shaped figure in the logo can also be seen as a variation on the Möbius strip. [view · edit · purge]Möbius strip, or simply Mobius, is a surface with only one side and only one boundary. An example of a Möbius strip can be created by taking a paper strip and giving it a half-twist, and then joining the ends of the strip together to form a loop. Thus it can be considered that the name "Mobius" refers to the concept of how many elements from other games in the series are incorporated into Mobius and make a harmonic whole.