This is the last boss before the point of no return, so the player can still return to the world map after defeating it to do more sidequests or grinding.

Its beam and laser attacks go far beyond the damage of any modern weapons.

When connected to the Left Probe and Right Probe, Mobile Type 8's counterattack, called Twin Homing Laser, can cause havoc among the party. To avoid the counterattack the party must only attack it when it is disconnected. The Corona attack reduces each of the characters' HP to 1.

Its most devastating attack is Megido Flame when in "Mobile Off, Support On" mode. It is the last attack used in the aforementioned mode and will deal major non-elemental damage to the party while ignoring Defense.

The Left Probe greatly enhances the damage caused by its carrier's counterattacks. Neither Probe is weak against a particular element. Mobile Type 8 itself is weak against Lightning.

When the party is reduced to 1 HP, one or two characters can unleash Limit Breaks and the remainer(s) can heal to avoid KO by the probes, as they like to attack after Corona, and Megido Flame is soon to follow. If Quistis knows White Wind, it is the perfect way to heal while the others also use their Limit Breaks. If the Limit Break command does not immediately pop up, the player can cycle through the turns when the character's ATB gauge is full with

until it does. X-Potions and the Recover command are also good for healing one party member to full. The player can also summon a GF as a buffer to the damage from Megido Flame.

As it is impossible to totally destroy the Probes, the party should concentrate on attacking Mobile Type 8 when it is disconnected from the Probes. The player can exploit the Vit 0 status to reduce Mobile Type 8's Vitality and Spirit to 0. The player can summon Doomtrain, use Quistis's Bad Breath or Acid, or cast the spell Meltdown.

Mobile Type 8 is a Level 7 Boss Card in Triple Triad used for playing the minigame and for turning into ten Shell Stones with Quezacotl's Card Mod. It is a rare outcome of successfully using the Card command on Anacondaur and Blue Dragon. 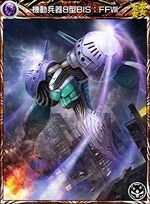 It's Japanese name contains "BIS". [view · edit · purge]Bis is a Latin prefix or suffix designating the second instance of a thing.