An expert in the ancient art of shinobi. Miyuki and her kind pledged allegiance only to their masters. Having devoted her life to servitude, she remembers little about everyday culture. Being extremely reticent, she has no interest in her conversations about her past life.

Miyuki is a character and summonable unit from Final Fantasy Brave Exvius. A ninja hailing from the Kingdom of Pharm, her vision can be summoned by Rain and Lasswell to aid them in their battles.

Originally an inhabitant from the continent of Pharm,[1] Miyuki was born to Chizuru[1] and her husband, a ninja who served the same master as her. Miyuki had an older brother Hayate, who was the legitimate successor to their father's clan. Chizuru, a retired samurai, taught Miyuki and her brother the samurai code, but the siblings became ninjas like their father. Miyuki and Hayate pledged themselves in service to the master their parents served, just as their family had done for generations.

As she grew, Miyuki's talents allowed her to be an expert dual-wielding swordswoman; however, Hayate was jealous of her gifts. The coldness he showed Miyuki gradually drove her towards the darkness. She went though years of abnormal training that led her to develop a dark aura and a sword-fighting technique that was able to cause anomalies within her opponents.

Ultimately, and under mysterious circumstances, she left her family's home and fled from their master's domain, seeking the power of darkness. To take responsibility for Miyuki's desertion, and filled with grief, her mother Chizuru took her own life by committing seppuku.

Although Hayate apparently left in search of Miyuki, they never saw each other again. While Miyuki's fate remains a mystery, what is known is that she left behind a crystal with her memories, to be summoned by those with the power of visions.

Miyuki's job is listed as Ninja. A 3-5★ Rare Summon (6★ in JP version), her role is that of Support. She has no natural element or status resistances. As regards equipment, she can equip three types of weapons: daggers, katanas and throwing weapons. She can equip hats and clothes only, as well as accessories. Miyuki's Trust Master reward is the Sakurafubuki katana, which has an ATK power of 98.

Miyuki can be awakened with the following materials:

Miyuki has affinity to Black Magic (Levels 3-5), but does not naturally learn any magicks. Depending of her Rarity level, he has two (3★), three (4★) or four (5★) ability slots.

Miyuki's stats at her highest levels are as follows (with no passive abilities taken into account), along with the maximum amount of stat points that can be increased through pot-enhancements:

Miyuki's Limit Burst is a damage-type attack that, depending on her rarity, does four, eight, or twelve hits (Rarity 3★, 4★ and 5★, respectively). 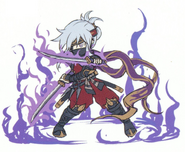 Miyuki is a common Japanese feminine given name with various meanings depending on the kanji, including but not limited to "beautiful snow" (美雪) "beautiful fortune" (美幸), and "deep snow" (深雪).