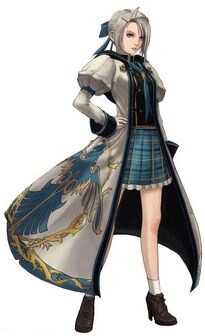 Miyu Kagirohi (ミユウ・カギロヒ, Miyū Kagirohi?), also known as Myuria (ミューリア, Myūria?), is a supporting character and the secret main antagonist of Final Fantasy Agito. A member of Class Second, she supports the cadet over the course of the game.

Miyu is a young woman with silver hair, tied in a bun with a blue bow, and purple eyes. She wears a white and sky-blue hooded frock coat embroidered on its hem with two phoenix emblems. In some official art, her coat is fastened round the waist with a sky-blue ribbon tied in a bow at the back. Beneath the frock coat, she wears a black top and a short deep-blue, tartan frilled skirt. On her feet, she wears high-heeled ankle boots and white socks. As befits her position, she wears the sky blue mantle given to Class Second members.

When she is chosen to represent the Rursan Judge, her eyes glow with a brighter purple and a purple l'Cie brand hovers over the right side of her face. Her monstrous form is a giant purple-hued monster with three lion's heads.

Responsible for summarizing the opinions and views of the Agito Cadets, Miyu has an unyielding personality, and in the time prior to Tempus Finis is generally helpful and supportive, as well as being crucial to determining actions for the Cadet.[1] When chosen as the Rursan Judge, she becomes similar to other Orience l'Cie, losing her emotions and devoting herself to her Focus.

Miyu is the General Cadet Representative for Akademeia in the Dominion of Rubrum. A member of Class Second, she can be found in the Terrace during the morning, afternoon and evening. She helps one particular cadet (the player) as they are sent on missions across Orience during the war with the Militesi Empire. Ultimately, she is determined to find Agito, the foretold savior of Orience.

When Tempus Finis arrives, Miyu reveals her true identity as Judge Myuria, a servant of the Rursan Judge who exists to test the people of Orience to find those with the potential of becoming Agito. She falls to the Cadet and since she failed to awaken Agito, or her role as the Rursan Judge, the world is reset for the next iteration of the spiral.

She appears in the next cycle of history, fulfilling the same role and still connected to the events behind the scenes. In this reality, Ace is chosen as the avatar of the Rursan Judge, and the cadet must kill him. As things fail once more, the spiral prepares to reset. Miyu—during her time as Judge Myuria—made a deal with Arecia Al-Rashia, breaking away from her master to serve Arecia as she believed in humanity's potential. Her fate following the second cycle is uncertain.

Miyu makes a brief appearance in the manga. When Kurasame Susaya was still a young cadet, she is encountered as a young girl. Her ultimate ambition is to enter Akademia.

Miyu makes an appearance on a Fire-elemental card.

Concept art for Miyu as Myuria exists in the Final Fantasy Type-0 artbook. She is depicted as a woman in a mask and bearing strange appendages. This incarnation of Myuria was cut from the game.[2] Her role in Final Fantasy Agito was to expand the school life aspect of Orience's protagonists, something he had initially planned for the game's original version, Final Fantasy Agito XIII.[3]

Myuria is a girl around 14 years of age. Half of her face is covered with a mask. She uses worm-like creatures as her weapons. Originally, Myuria was set to appear alongside another mysterious masked man in the second half of the game after Tempus Finis comes upon Orience. However, the developers decided to scrap the character.

Miyu is voiced in Japanese by Haruka Tomatsu.

Miyu with the principle characters of Final Fantasy Agito.

Miyu in a cutscene.

Miyu after the final battle.

Miyu in Final Fantasy Type-0 Side Story: The Ice Reaper. 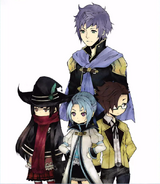 Miyu with other characters in Final Fantasy Type-0 Side Story: The Ice Reaper.

Kagirohi is an old Japanese word, meaning "light of the dawn".