Various
The Mithra are a female-dominant race of cat-like humanoids and one of the Enlightened Races available to play in Final Fantasy XI.

A predominantly female race of hunters who live alongside the Tarutaru in Windurst, the Mithra are easily identified by their characteristic ears, which give them spectacular hearing ability, and their long tails, which give them an unparalleled sense of balance.

Players can only choose to play as a female Mithra, as the Mithra men are fairly rare and are seen as something of a commodity. Only the females, who are more numerous, go out to adventure.

But you are Mithra; you should understand. We are one with nature, and cannot ignore her call for help.

Cunning and quick witted, the Mithra have been amazonian warriors and hunters since the Age of Beasts and their culture reflects this. The Mithra form tribal communities, with each tribe overseen by a Chieftainess. These tribes answer to a single Tribal Chieftainess who acts as the society's ruler, governing the entire Mithra community. Currently, there are two Tribal Chieftainesses, one in Gha Naboh and one in Windurst.

Due to the rarity of male Mithra, the men stay at home to raise the children while the women formed the political and warrior classes; this custom was implemented to shelter their small percentage of men.

The Mithra homeland nation is the Gha Naboh Matriarchate (also known as "Gha Naboh"), with its capital City of Yhoh. It is located on the continent of Olzhirya. The Mithra built and maintained a society on the nation's island chains. The Mithra know the nation as "the motherland", and it was a peaceful nation ruled by a wise and beautiful queen during the times before the Crystal War.

The town of Mhaura is considered the Mithra capital for those living in Windurst. The small town of Kazham in the Outland islands is also considered a Mithra settlement. Thanks to the friendly relationship with the Tarutaru (whom many Mithra view as little brothers and sisters), Windurst enjoys a peace and prosperity that is only threatened by the Yagudo, with whom Windurst shares an uneasy truce.

The Mithra are a race of hunters, and their names are designed to accommodate for this. Examples include "An Shanaa", "Hanaa Punaa", and "Fo Mocorho", Mithra names include a first name and a family name.

While hunting, they call each other by their first names ("An", "Hanaa", and "Fo") whenever they are closing in on prey or in a tense situation. Their short, easy to pronounce names allow them to speak fast and easily during such times. One might surmise that, if their names were as long and elegant as those of the Elvaan, they might bite their tongues while trying to call each other, and whatever they were chasing would slip away. When speaking, Mithra tend to roll the "r"s in certain words, resulting in what sounds like a cat purr or growl depending on the inflection.

Resembling humanoid cats, the Mithra tails give them an excellent sense of balance that no other race compares with. They have the highest dexterity and agility among the races of Vana'diel.

Their feline ears allow the Mithra an acute sense of hearing, and react in accordance to the Mithra's emotional state, much like cats. Other than these traits and a feline nose, their physical stature is comparable to that of a Hume, although they are shorter than the average Hume adult.

The Mithra have the same dietary habits as the Humes, eating both greens and meats, although the Mithra are the only race who eat raw fish.

The Mithra have great energy and have been stereotyped as mischief makers, whereby their inherent curiosity often gets them into trouble. Mithra are not particularly strong, brilliant, or charismatic, but due to their outstanding dexterity and agility, they are ideal for classes such as Ranger, Ninja, and particularly Thief. These traits have caused them to be stereotyped as a race of cheats and are sometimes treated with disdain and suspicion by the other races.

Due to their tribal hunter culture, their lack of social grace also penalizes their Charisma. Aside from their Dexterity, Agility, and Charisma, Mithra have fairly average statistics and can play almost any of the jobs without difficulty, with possible exception given to Beastmaster and Bard due to their low Charisma scores.

Due to their free-willed nature, the Mithra prefer the life of a mercenary to the disciplined lifestyle of regimented forces. Most of their military organizations are mercenary forces. The 'homeland' Mithra also have a navy.

Contrary to the myth, the Mithra evolved from the magic blast thought to have wiped out the Zilart race. During the Age of Beasts, the Mithra kept to their island homes to the south. Fending off beastmen attacks only when encountered, they never sought to expand their territory.

During the Age of Magic, a group of Mithra, discontent with their life of solitude and hearing tales of strange magical beings from the elder Mithra scouts, ventured out across the ocean to see these beings for themselves. The Chieftainess, angered by the disregard for tradition, condemned these actions and those Mithra who left in search of this knowledge were not permitted to return. This did not stop the adventure-seeking youth, though, who set off their journey.

Eventually arriving at Windurst, the Mithra, in awe of the Tarutaru, were welcomed with open arms. Their strength and tactical skill proved useful to the physically weaker Tarutaru, which made it a dually beneficial arrangement. The Mithra were allowed to live in Windurst with Tarutaru protection and magics, and in return would serve as the footsoldiers of the Taru military.

Together, the races carved and built the town of Mhaura into the cliffs overlooking the sea. It was a reminder to the Mithra that their home was not so far away after all. Mhaura, though always a small town in stature, would become a special place in the hearts of Mithra in Windurst. However, as more races gained powerful magic, the Tarutaru isolated themselves from the world, closing their nation's borders from all but the Mithra.

During the Age of Power it was assumed the Windurst-based Mithra fought alongside the Tarutaru against the Elvaan empire.

Come the fall of the empire and the Moon's Eclipse, the Mithra had developed their own population and chieftainess within the capital of Windurst, and had maintained relations with the Mithran homeland. When the Multinational Expedition began, the Mithran homeland sent their representative, Yow Rabntah, to obtain a piece of the dark magicite and bring it back.

The magicite was used to form the legendary Mithra weapon, the Bow of Light; although powerful, the magicite within the weapon would overcome the wielder with fear, hatred, and jealousy, causing them to attack their sisters indiscriminately. This brought about a civil war within the nation and, in retribution for its creation, the execution of Yow Rabntah. The bow, which could only be an asset in the hands of a pure-hearted wielder, was snuck away from the nation and given to Lehko Habhoka, Yow's implied son, to use in the Crystal War.

With the Crystal War's onset, the Windurst-based Mithra culture was as threatened as the Tarutaru, and the two races merged their armies against the beastmen. Many Mithra from the islands of Olzhirya, seeking fame or fortune, volunteered to help and were dispatched to the Federation of Windurst as mercenaries. Despite the combined efforts of the Allied Forces, Windurst was razed.

At the war's end, the Mithra played a key role in rebuilding the city and many have since taken up permanent residence there.

The following table shows the level 1 statistics for each class a Mithra can take, keeping in mind that the difference in attributes between each race is quite negligible, and any of them will be able to do any job competently as long as they are geared well:

In Dissidia Final Fantasy, Shantotto's battle greeting to Zidane remarks about his similarity to a male Mithra.

In Dissidia 012 Final Fantasy, there is a trade material called "Mithra Tooth", possibly based on the item "Mithra Fang Sack" in Final Fantasy XI. In the original game, it was used to trigger a Garrison battle at the Outpost in Buburimu Peninsula.

The Mithra is one of the playable races.

The Mithra character design was done by Nobuyoshi Mihara. Conceived to be humanoid, feline jungle warriors, the Mithra were initially designed to look a lot more feral and primitive, with a stronger emphasis on looking like jungle cats. During the game's conception their feral appearance was toned down and their clothing became more in conjunction with that of the other humanoid races. However, their nature as jungle warriors is still shown through their skimpy clothes and behavior.[1]

Male Mithra were not seen until the release of the expansion Final Fantasy XI: Wings of the Goddess and the introduction of Lehko Habhoka.

The Mithra homeland, Gha Naboh, and the continent of Olzhirya, is not currently accessible for players. Players can, however, go to Kazham, a "Tropical Paradise" located on the Island of Elshimo, which is considered the Mithra's second home. 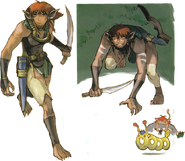 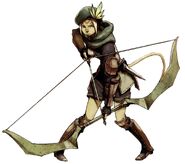 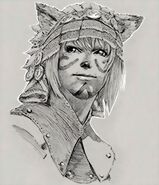 Mithra is an important deity or divine concept in Zoroastrianism and later Iranian history and culture. In addition to being the divinity of contracts, Mithra is the all-seeing protector of Truth, the guardian of cattle, the harvest and of the water.