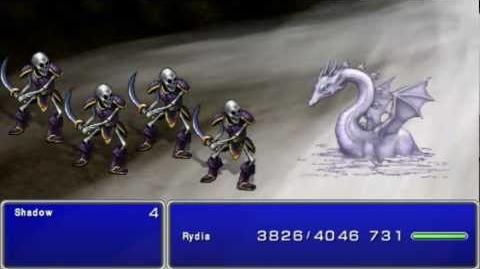 Mist Breath (きりのブレス or 霧のブレス, Kiri no Buresu?, lit. Mist Breath), also known as Radiant Breath and Mist, is a recurring ability in the series. This attack is mostly associated with Rydia's Mist Dragon eidolon in the 2D versions of Final Fantasy IV.

Starting from the 3D versions, the Mist Dragon's summon attack would be changed to Radiant Breath, taking its name from the wyvern Blue Magic spell from Final Fantasy XI. Newer English localizations of the 2D versions Final Fantasy IV have adopted the Radiant Breath name for the Mist Dragon's summon attack, this change is not done in the original Japanese language versions.

Radiant Breath, originally known as Mist Breath or Mist, in previous versions is the Mist Dragon's summon attack in the 2D versions. It has a casting time of 3 and costs 20 MP to summon. The damage is based on Rydia's current HP—the more HP she has, the more damage it does.

In the Advance version and beyond, the Mist Ring adds a single Blink image to the party when Rydia is equipped with the ring after Mist Dragon was summoned. In the 3D releases, Radiant Breath was replaced with a new variant that became a Holy-elemental attack and its summoning cost was increased to 35 MP.

Mist Breath is the ability used by Rydia during battle. 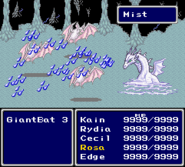