Mist is a town in Final Fantasy IV and Final Fantasy IV: The After Years. It is a small village located in a valley north of Baron and southwest of Damcyan. Mist is inhabited by a Summoner tribe, and is Rydia's hometown.

Cecil Harvey and Kain Highwind are ordered by the King of Baron to deliver the Carnelian Signet here. On the way, they fight their way through the Mist Cave and defeat the village's guardian, the Mist Dragon. As a result, Rydia's mother, who had summoned the dragon, died just as her summon did.

Upon Cecil and Kain's arrival at Mist, the package opens by itself, and Bombs are released into the village, setting it on fire and killing most of the highly-trained Summoners. While the village burns to the ground, the two find Rydia clutching her mother's corpse in shock. Overhearing how they slew the Mist Dragon, Rydia correctly accuses Cecil and Kain of murdering her mother. Kain then half-heartedly suggests killing her as he had surmised that the King of Baron must have wanted the Summoners dead.

Cecil urges his friend to reconsider and the two decide to fight back against Baron, no matter the cost. Concerned for the girl's safety, Cecil offers to take Rydia with them, but she vehemently refuses. When the soldiers presses her she summons forth Titan, who causes a massive earthquake that separates Cecil and Kain and causes a massive landslide that would block off the Mist Valley.

The village chief and three other people are standing in front of a grave, happy that the peace in Mist has finally returned. Rydia arrives at Mist where the chief thought that she should be in the Feymarch. A few moments later, Edward arrives at Mist with two bodyguards, where he meets up with Rydia. When Rydia asks why Edward is in Mist, he explains that he is there to revive the village's fortune.

At the ending, Cuore, the last Maenad, is being taught by kids on how to properly communicate with others. Asura and Leviathan appear in which the kids call Rydia who exits her house to meet them. They take a liking to Mist and they explain that since Rydia couldn't visit them, they can visit her instead. Cuore greets them and they mention that Cuore looks like Rydia when she was younger. Edge arrives and Cuore reprimands him for being late. He apologizes and explains that it's hard to get free time since he has a country to run. The King and Queen reveal that it was Edge who suggested they pay Rydia a visit. Cuore wants to play with Edge in which Edge agrees as long as no magic is used and Cuore agrees.

It is the only structure in the village apart from the shops. After Rydia rejoins the party, the MP+50% augment can be found here near the secret passage. The secret passage leads to treasure.

Note: These items cannot be obtained on the first visit, and Mist cannot be revisited until the Devil's Road is unlocked.
2D versions

Mist is the only town that does not have an Item shop.

Note: These shops cannot be reached on the first visit, and Mist cannot be revisited until the Devil's Road is unlocked.

The background music that plays in Mist during Cecil and Kain's first visit to it is "Ring of Bomb", while the track that plays in the town after this event is the Final Fantasy IV "Town Theme".

In The After Years, when the blue planet invaded in chaos by the True Moon in The Crystals chapter, the track "Rydia" is played instead.

Mist Region is a location.

With the bypass event glitch it is possible to avoid visiting Mist when Cecil and Kain are meant to deliver a package there at the beginning of the game. By skipping Mist Kain does not leave the party and Cecil never meets Rydia. If the player then enters Mist from the "wrong side" the event where Mist is burned down doesn't trigger, and the player can visit Mist's weapon shop earlier than intended. The whole game cannot be played without triggering the scene where Mist burns, however, as Tellah will never join the party at the Underground Waterway unless the scene at Mist has been triggered, which freezes the game at the set battle where Tellah is meant to battle Edward. 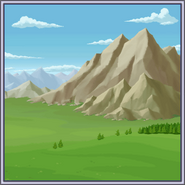 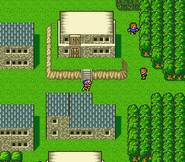 Mist, the village of Summoners (SNES). 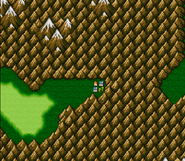 Mist on the world map (SNES).

Mist on the World Map (GBA).

Mist on the world map (PSP).

The earthquake caused by Titan (PSP). 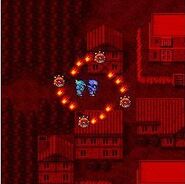