Moro
Mist is a neutral-elemental Eidolon from Final Fantasy Dimensions II. She can be obtained as a signet for Morrow to equip for completing the finale quest of the "Eureka" arc, "Supreme Primal and Fayth".

Mist's signet is one of Morrow's strongest at the time it is obtained, providing him with a balanced boost in all his stats. Her signet allows Morrow to use one of his strongest support abilities, Daily Prayer, which revives all party members, granting them an instant turn, and giving them a single stack of Invincibility. Her summon attack is also excellent for support when facing stronger Malboro-type enemies, due to it removing multiple types of debuffs from the entire party.

Players should attempt to fully rank her signet, as its passive increases the rate Morrow's summon gauge fills when taking damage by 40 points, allowing his gauge to fill faster in post-game challenges in Babil Tower.

Mist's signet artwork is based on her official artwork and in-game sprite. Her first two artworks depict Mist praying with her eyes closed and wielding a staff with an sun-shaped astrometer hovering above the top end. In addition, she wears gold accents on her robe with seven rainbow crystals, representing the seven Prismatic Gods.

Her final artwork depicts Mist no longer praying. She has a joyful expression on her face as she is floating over the land of Eureka. Her robe thins out and gains more gold accents in certain areas, along with gaining a broach on the chest with fourteen rainbow crystals encircling it. Her staff's sun-like astrometer transforms into a planetary astrometer. Lastly, she becomes encircled by seven shining rainbow crystals, serving as another allusion to the Prismatic Gods.

In the original free-to-play versions, Mist's signet could only be obtained during the "Primal Lord Starbow" raid event. She taught the same abilities as in the premium version and was a SSS ranked signet. 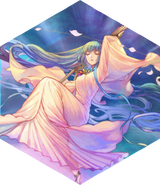 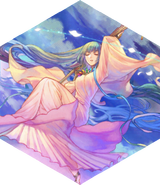 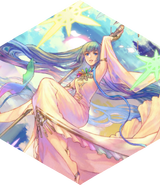 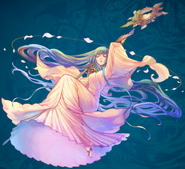 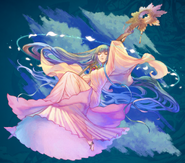 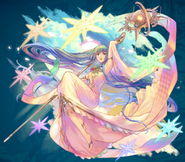