As with expansion missions, many of the quests in the series start automatically upon completion of the previous one. A player must be at least level 30 with one of the 3 Abyssea add-ons purchased in order to start the first quest.

The following are the 9 zone quests that mark the player's progress through Abyssea.

To restore hope to those who struggled for survival in Abyssea - La Theine, you must vanquish a fearsome Gigas who never leaves home without his golden helm.

A giant worm thought long extinct has reemerged in Abyssea - Tahrongi, and now terrorizes those who have taken refuge in the canyon. Could this gargantuan beast be causing the recent destabilization of the boundary between worlds?.

A grossly oversized, mutated subspecies of peiste has been wreaking havok upon the folk of Abyssea - Konschtat. Remove the Fangs of this foul fiend, that tomorrow might be a better day.

A demonic, oversized, and highly palatable orobon has been the source of endless grief for the beleaguered folk of Abyssea - Misareaux. Will the survivors ever be free from its savage maw and the temptation of its succulent flesh?

The struggling folk of Abyssea - Attohwa have been living in constant fear of a dread wamoura. Must the survivors always cower in the shadow of this winged nightmare?

A gargantuan beast identified as a ruszor has been terrorizing the embattled folk of Abyssea - Vunkerl. Will a hero arise to end the reign of this tusked terror?

A fiendish roc, capable of kicking up flesh-rending winds in its wake, is the bane of the bedraggled survivors of Abyssea - Altepa. Can this feathery storm of death be stilled, and the people given the chance to pick up the pieces?

The hope-starved survivors of Abyssea - Uleguerand live in constant fear of a gargantuan diremite with a relish for man-flesh. How many victims must end up inside the belly of this foul beast before something is done?

An uncharacteristically aggressive uragnite as been a source of great torment to the survivors of Abyssea - Grauberg. Will a savior not rise to free the people from the threat of this belligerent bivalve?

How is it possible that no one else noticed the mysterious flash of light that lit up the skies of Port Jeuno? A man calling himself Joachim claims to know the answer...

What is this phenomenon called "noise" of which Joachim speaks? If you would learn the truth, take the traverser stone and visit a cavernous maw that has been freed from its frozen state.

Abyssea, a parallel world, eerily similar yet deathly different from Vana'diel... What terrible cataclysm could have befallen the realm? Overhead, the sanguine sky is an ever present portent of looming destruction...

At Joachim's behest, you must meet with a mystery man whose identity cannot yet be disclosed. Make your way to the stone circle in the La Theine Plateau at a time between dusk and dawn.

An Officer and a Pirate[]

The mystery man turned out to be an old pirate called Gilgamesh, sent by yet another mystery person to measure your suitability. What could be this "truth" of which he speaks? Meanwhile, events beyond the grasp of mortals are being set in motion...

You are the ray of hope for the people of Abyssea. Soldier on, if you would cast your light upon the truth which lies hidden within the depths of madness.

(Complete an additional 2 zone quests for a total of 5)

Gilgamesh wishes to speak with you again, most likely regarding some grave matter. As before, make your way to the stone circle in La Theine Plateau at the time between dusk and dawn.

Gilgamesh has brought you word of an unsettling phenomenon that has been observed the realm over. What could be causing this grid-patterned breakdown of the land? The secret of this world of darkness will soon be revealed...

(Complete an additional 2 zone quests for a total of 7)

Joachim bears a message from Gilgamesh, who has need to speak to you once more. This time, make your way to the Hall of the Gods, deep within Ro'Maeve.

(Complete the remaining 2 zone quests for a total of 9)

The chilling truth behind the cataclysm lies exposed: divine will is at work. But what chain of events could possibly have led to the disappearance of the Champions of Abyssea?

The enigmatic caturae are suspected to hold the key to gaining access to Al'Taieu, the celestial capital. Defeat all six known species, that the door to salvation might be cast opened!

Beneath a Blood-red Sky[]

With the caturae eliminated, a gateway to Al'Taieu has manifested in Vana'diel, on Qufim Island. What dark shadow lies in wait on the far side? There is but one way to find out!

Prishe, the sole survivor of mankind's ill-fated confrontation with Promathia, speaks of the Twilight God's transformation into a fearsome embodiment of terror and dread. The final battle is at hand, and the stakes are high: the very survival of Abyssea! 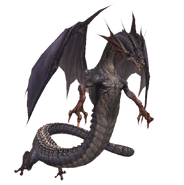 Although the destructive will of the Twilight God is no more, the horrendous destruction wrought upon the land cannot be undone overnight. Yet now seeds of hope have been planted within the hearts of men...the hope that glory days shall once more return to Abyssea.

You have made a solemn promise to pay visit to Prishe, who has sworn to watch over the world from a faraway demesne.

Note: This quest marks the conclusion the Abyssea storyline. It cannot be completed.