As the terms imply, missions and quests are often series of pre-scripted scenarios that require the player to meet specific objectives to obtain items and/or to advance in secondary leveling systems that otherwise have little impact on the games in which they appear. Early titles used these systems as sidequests so as to obtain very rare items; however, as the series has become more social, missions serve as a means for players to compete with one another and share their achievements.

A number of games in the series advance story via the mission system. As such, the scenarios and objectives are issued in a consistent format, but actual gameplay is left to the player.

Missions exist in Crisis Core, mostly, as a series of sidequests and small battles that can be completed to gain more powerful accessories and materia. There are only a few missions in the beginning of the game that must be completed which function as the game's tutorial. After the tutorial, the mission screen can be pulled up at any time.

New missions become available when a player checks a Save point if there are any available. More missions will become available the further along in the main plot line a player advances and can be earned through completing prior missions, at specific points in the story, or by optionally talking to certain people or engaging in certain events at points in a chapter.

This game's definition of the word mission is rather different from the others; this is how the game is divided up. There is also a completely optional game mode called Extra Missions.

Each portion of the story as well as each sidequest in Final Fantasy X-2 is presented as a mission. The system will even inform the player that it is "Mission Time" by flashing it across the screen. The system does not inform players whether they are participating in a sidequest or actually advancing the story so it is possible to do missions in such an order as to inhibit the ability to gain 100% completion.

Missions refer to the Adventurer's advancement through a particular storyline in Final Fantasy XI. These are substantially different than quests aside from the fact they appear in a different menu; Quests under Quests, Missions under Missions. Missions are sequential and much more involved, including many intricately modeled cutscenes replete with dialogue. Quests generally are not terribly involved, and have minimal prerequisites.

In the original game, there are three main storylines each corresponding to one of the starter cities: Bastok, San d'Oria, and Windurst. With the Rise of the Zilart expansion, the Adventurer could take place in the storyline separate from their involvement in any of the prior missions (to a certain extent), revolving around this ancient race. Chains of Promathia, Treasures of Aht Urhgan, and Wings of the Goddess each subsequently offer the Adventurer additional missions.

The Hunt system is also an example of a mission system. Though considered by and large a sidequest, the player is required to initiate each mission with a specific sequence of actions: view and agree to the posted bill; then talk to the requester, slay the Mark, and report to the requester upon completion of the Hunt. Only two Hunts are mandatory, with one of the two being unofficial. Each carries a notice upon acceptance and completion.

Missions in Final Fantasy XII: Revenant Wings are divided into Storyline Missions and Side Missions. They are the main gameplay setting of this title, aside from Monster and Summon Melees.

Missions are available on the world of Gran Pulse and can only be initiated by activating Mission Crystals scattered across the landscape. There are 64 missions in all, some of which involve the oversight of the fal'Cie Titan.

Missions, also known as quests, are general quests placed on the Adventurer's quest journal. Within the quest journal, they are divided in several categories: Main Storyline, which follows the game's main plot and are the most involved quests, separated by city-state, Grand Companies quests, which contains special missions issued by each company as well as the Seventh Umbral Era storyline, Job and Class quests, that explores the lore of each class and job and "Sidequests", which are the most basic quests with no particular tie to any major storyline, although some form small quest chains with an intertwined storyline, such as the Hildibrand inn quests.

NPCs issuing new quests have a small "!" marker above their heads.

Final Fantasy Tactics: The War of the Lions[]

In the PSP remake of Final Fantasy Tactics, new multiplayer content was added, including a series of fifteen battles that can be played co-op with another player. Each player gives a certain number of characters, and together they fight a battle against the AI controlled opponents. These battles are entirely optional, and lost items, gil, or dead characters are not permanent, but the treasure found is. 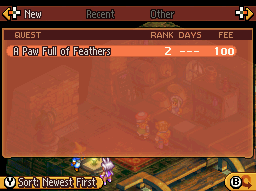 Like Tactics Advance, the player (as Luso along with Cid) chooses a mission from the Pub's Roster. There are about 400 missions to be completed, 293 of them appearing in the pub's roster, and some of them appear after certain mission are completed or after a certain character has joined the clan.

Seven missions will not appear in the roster, but instead they are begun by reading the correct notice at the pub. These missions are specific to Adelle and her Heritor job, while the other 100 are completely optional, meaning they won't appear in the Mission count. The Clan Trial Missions also don't enter in Missions count either.

Missions are given to Class Zero by Kurasame or from Moglin. In the Multiplayer, one can play the Missions with comrades or in the Main Menu of disc 2, one can replay played missions.