Edit
watch 01:58
How to Obtain Barret's Missing Score in 'Final Fantasy 7'
Do you like this video?
Play Sound

A kind of gun-arm, a type of weapon from another world, that greatly boosts physical and magical power when equipped. It is said that the leader of a resistance group used this gun-arm to fight against Shinra Inc, a corporation trying to use the planet's life force as energy.

Missing Score is Barret's ultimate weapon, obtained by finding it during the Raid on Midgar at the Sister Ray while Barret is in the party. It is permanently missable if not picked up.

It provides 98 Attack, 108 Atk%, 49 Magic, and 4 linked Materia slots with Nothing growth. It deals more damage based on the more AP is on the weapon. This is then modified by the attack's power (1.0 for normal attacks). To achieve a base 1.0 damage multiplier, the weapon needs to have approximately 150,000 AP on it, and to reach the 4x multiplier that is comparable to other characters with their ultimate weapons, it needs to have approximately 630,000 AP on it. Beyond this, the weapon can grow to be significantly more powerful.

Missing Score is a magicite pistol for Cater. It has attack power of 52 and is found in a treasure in Bethnel Caverns and sells for 2700 gil. 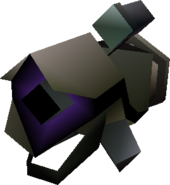 A missing score is an unidentified variable within algebraic mean equations used in analyzing mass consensus to determine a general average. The name reflects Missing Score being a weapon of variable power improved upon additions of customizable Materia, and as a weapon that stands out as its output exceeds average means.