Galbadia's long-range missile base. As the only country to own long range missiles with the exception of Esthar, they pose a major security threat to the world. It is believed that the missiles are armed with a target-lock mechanism. The details are unknown.

The Galbadian Missile Base is a location in Final Fantasy VIII situated out on the deserts in the south-western region of Galbadia.

Feared for their destructive ability, the Galbadian Missile Base houses several intercontinental missiles and their respective launchers, which grants the Galbadians the capability to launch a strike against any location in the world with a high level of accuracy and no prior warning.

While the party are detained at the D-District Prison, Squall and his friends learn that Galbadia is planning to fire missiles at Balamb and Trabia Gardens in retaliation for SeeDs' failed assassination attempt on Sorceress Edea.

Too late to stop the first launch targeted at Trabia Garden, the party splits into two groups—Squall's group heads for Balamb Garden to warn Headmaster Cid while Selphie's group infiltrates the Galbadian missile base to prevent the second launch. By driving a Galbadian APC they had stolen from the prison, they enter the base disguised as Galbadian soldiers.

While Selphie and her team explore the base, the maintenance soldiers ask the party to take their place with the inspection. The guard leaves and lets them in. Entering the control panel room, Selphie presses any button on the panel, which causes the system to malfunction. As they exit the room, the maintenance soldiers ask them what's going on. Selphie lies that they were just about to call them. As the soldiers enter the room, the party attacks them. A soldier tasks them to push the launcher. After they help push the launcher, Selphie sets the error ratio of the missiles to maximum. A guard outside the control room tells them that the room is off-limits, but Selphie tells him that they will report on the missile coordinate data and the guard lets them through.

At the entrance of the base, the guards use their robotic tank to stop the party from escaping. Selphie's party defeats the guards, but finds they are trapped inside the base as it explodes. Fortunately, they survive the blast by taking cover inside the shell of the tank they battled, and later end up unknowingly battling Squall's party in the heavily damaged device at Fishermans Horizon.

If Selphie's team runs out of time escaping the Missile Base, or fails to set the missiles' error ratio to maximum, the missiles destroy the stationary Balamb Garden.

Missile Base on the world map.

The missile base is located in the south of the Great Plains of Galbadia.

The base is a military complex surrounded by desert and resembles military bases used by the United States military. It is surrounded by concrete walls, contains hangars and bunkers, as well as large industrial buildings with metal pipes. The missiles themselves are launched from a missile silo in the ground and are controlled from a high-tech internal complex largely underground.

After being destroyed, a Confuse draw point can be found on its site.

None
The front gate is similar in look and design to most modern high-security military institutions. Risible concrete barricades block the road entrance until visitor security is checked out by the security gate check.

The player needs to drive the APC into the base to get past this screen and enter the base. If the player enters the base on foot, Selphie and the guard have a humorous exchange.

BGH251F2
Like modern military bases, the surface complex consists of numerous bunkers and hangars as well as a cleared launch area for the missiles. Several military vehicles are parked along the way. The left end of the complex is blocked by a wall, with a door in the bunker at the end providing a route down to the internal complex.

Base Leader and Base Soldier
The internal complex goes down into the ground of the base and contains the main technical operation rooms and storage facilities that allow missile target and tracking as well as the launch major controls. It is a dimly lit area with secured doors and machinery throughout. The complex consists of several areas, marked with a number on the wall or on the floor.

The first area inside, B1, is a dimly lit room, containing stairs down, a save point, and two doors at the end. The door on the right is locked, though examining the panel between them allows the left door to lead to the next screen. The second area, M3, consists of a catwalk through a larger room with several objects moved by cranes. Half-way through this catwalk on the left is a door to the circuit room, a high-tech room with several terminals on the left, a yellow electric generator near the back, and a Blizzara draw point. Following the catwalk in M3 to the right leads to another area, M5, with a longer catwalk overlooking the missile silos, which leads ahead then bends to the right with stairs down to another screen.

The next area, M6, consists of another catwalk leading around and right to the next exit. It contains a save point in the top-left corner, a door to the missile launch room at the top half-way through the catwalk, and stairs at the end of the catwalk on the right that lead to the control room, a smaller room filled with computer terminals. Behind the stairs on the left end of M6 is a path that leads to M7, a wide platform area above metal grating with a Blind draw point, and two maintenance soldiers on duty. The missile launch room, accessed via the door at the top of M6, is a wide room containing missiles, with maintenance soldiers on duty, and a hidden Full-life draw point.

Getting a perfect SeeD rank upgrade[]

Depending on how the player performs during the mission, 200 SeeD experience (2 levels) is the max one can win in this part of the game, but to get a perfect SeeD upgrade in the Missile Base mission, the player must make the right choices.

Although there are many moments where the game asks the player to make a choice, only three affect the SeeD rank: passing on the correct information to the soldiers, choosing to fight or not, and the amount of time the player sets for the self-destruct mechanism. The reward for the mission starts at 200 points but points are detracted by wrong choices.

If the player accumulates penalties, another small one will be applied at random, always between 3 and 8 points.

The player must first find the inspectors.

Then deliver their message correctly.

Get into the control room.

Talk way out of trouble.

Set the error ratio to maximum.

Confronting the Base Leader.

The theme of the Missile Base is "The Spy", a track on the third disc of the Final Fantasy VIII: Original Soundtrack. An orchestrated version of the theme performed by the Hollywood Symphony Orchestra is included on the The Best of Final Fantasy 1994 - 1999: A Musical Tribute album.

Selphie's team infiltrates the Galbadia Missile Base in an attempt to stop the attack on Balamb Garden.

Prior to fighting BGH251F2, it can be seen covered up in one of the pre-rendered backgrounds.

The base has a terminal with an option to view the various equipment involved in the missile strike. By holding down

, the player can witness hidden views of a Soldier and an Elite Soldier dancing on the monitor.

While the main story only involves Selphie entering the complex, Squall also has a chance to approach the gate earlier on before or after reaching Deling City on disc one. Should Selphie's party approach the gate without a transport, a short scene occurs where Selphie ends up cursing and seemingly doing obscene hand gestures at the guard.

Each character in Selphie's party makes a different comment as they wait for the base's detonation.

Concept art of the gates. 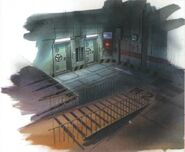 Concept art of the entrance. 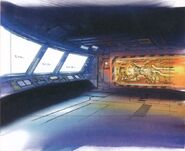 Concept art of the maintenance room.

The party infiltrates the base.

The party in disguise.