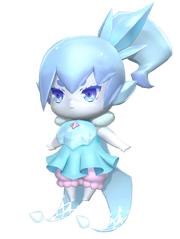 Shivan is a Rank I Water Ranged Esper that attacks using Blizzard. While being a Water Esper, she is actually an Ice-elemental Esper, and she has an astounding growth in Attack Speed.

Mishiva appears on a stamp for multiplayer mode.

Mishiva appears on a Triple Triad card in the version available via the Final Fantasy Portal App.