Final Fantasy Wiki
Register
Don't have an account?
Sign In
Advertisement
in: Main characters, Characters in Final Fantasy Crystal Chronicles: My Life as a Darklord

Mira is the protagonist of Final Fantasy Crystal Chronicles: My Life as a Darklord. A Selkie, she is the daughter of the former Darklord, and has taken over his place. Now the new evil genius, Mira has to fight off would-be heroes while protecting her tower in order to fulfill her dreams of conquering the world and rule with an iron fist. She is served by Tonberries.

Mira's appearance seems to be based around a dichotomy of light and dark. Her left half consists of a thigh-length pink and white dress with gold accents and extended on the left side. She wears a white stocking and an ankle-high gold armored boot. Her hair is blonde and her eye is gold. Her right side consists of a black corset and thigh-high skirt. She wears a purple-silver gauntlet and and armored boot. She has a thigh-high black sock and a black elbow-length glove both with pink fur to the top. She has a single black wing on her back and the top of her boot. Her hair is blue with two pink strands and her eye is red. Her demon- and angel-winged hair ornament is gold with a half-red and half-blue gem.

Mira's Dark Dress consists of a black corset and thigh-high skirt. She wears purple-silver gauntlets and armored boots. She has thigh-high black socks and black elbow-length gloves both with pink fur on the top. She wears a silver armor belt with a demon-like face buckle and a short red tie. She has short blue hair with two pink strands and a demon-winged gold ornament with a red gem and her eyes are red. She has black wings on her back and the top of her boots.

Her Radiant Dress consists of a thigh-length pink and white dress with gold accents and extended on the left side. She wears white stockings and ankle-high gold armored boots. She has short blonde hair and an angel-winged gold ornament with a blue gem and her eyes are gold.

Her Prim Dress is based off of Chime's Knell outfit and consists of a a long tight light pink thigh-high dress with puffy sleeves and a black corset. She wears a black and pink half skirt on her left hip. She has thigh-high striped pink and black striped socks and black fold-over boots. Her hair is blue on the right side and blonde on the left, with a small black top-hat and a gold ornament with a half-red and half-blue gem. She has black wings on her back. Her left eye is gold while the right is red and she has black glasses.

Her Bikini Dress is based on Chime's Summer outfit and consists of a black striped bikini top over a light pink bandeau. She wears black striped bottoms with a black belt and a mid-thigh pink half skirt on her left hip closed with a gold heart-shaped buckle. She wears white slip-on sandals with brown anklets on both ankles and a brown bracelet on her right wrist. Her hair is blue on the right side and blonde on the left, with a demon- and angel-winged gold ornament with a half-red and half-blue gem. Her left eye is gold while the right is red.

Her Cat Dress is based on Sherlotta's outfit and consists of a black sleeveless top with gold trim and a large orange bow with a silver bell and a black choker. She wears puffy pink shorts with gold stripes and black stockings. She has orange ballet-like shoes and a long black cat tail with a white tip. She has orange bows around both wrists and on the back of her shoes. Her hair is silver-pink with a large red bow in the back and her eyes are dark blue.

Her Mystic Dress is based on Rydia's outfit and consists of a dark green one-piece outfit with gold accents. She wears a gold belt and a light green half skirt on her left hip. Her sleeves are dark green with light green sashes draped over each shoulder. She wears dark green thigh-high boots and silver head ornaments with red gems. She wears a colorful necklace and purple stud earrings. She has short green hair and light blue eyes.

Her Puffy Dress is based on Porom's outfit and consists of a light pink romper that reaches her thighs with a white sash over her left shoulder with a green gem and a brown guard on her right shoulder. She has a brown belt with a red gem in he center and brown bracers on both arms. She wears pink striped thigh-high socks and pink sandals. Her hair is pink and tied in a small ponytail with a brown bow and her eyes are amber. She wears green stud earrings and a brown choker.

This section in Final Fantasy Crystal Chronicles: My Life as a Darklord is empty or needs to be expanded. You can help the Final Fantasy Wiki by expanding it.

Mira was a spoiled child, always tormenting the Tonberries and writing spells on the walls. When the Miasma disappeared, so did her father, who sealed himself inside the Dark Crystal. Feeling abandoned, Mira developed a resentment against him.

On her sixteenth birthday, Mira is crowned the new Darklord and has declared total war between monsters and people. She embarks on a conquest aboard her Flying Tower and arrives to a town where, despite her initial attack, does not cower in fear from her sight. Tonbetty explains that thanks to the humorous-looking shape of the tower, the villagers confused it for a kind of celebration. Mira leaves the town to resolve the issue.

Mira commands her servant Tonberries to find a famous hero whom she could crush. In search for a hero to defeat, Mira arrives to the hideout of a caravan of burglars, in hope that by defeating the famous Striped Brigands she will obtain the reputation of a dreaded Darklord and lots of striped apples for pie.

When Mira defeats the gang leader it is discovered they are actually the Stripped Brigand lead by Bel Dat. Bel Dat, irritated by the whole ordeal, expresses that she does have a great treasure, the secret of the new Darklord being half-demon, half-Selkie, and she starts to spread the secret all over the world.

Mira goes on a rampage, giving Tonbetty a drop kick that almost makes her head fly off. When asked to discuss the matter with her father, she refuses and sends the Tonberries to find herself another hero, a female adventurer ready to challenge the Darklord.

Upon defeating the adventurer, it turns out to be none other than Princess Fiona of Alfitaria, who wishes Mira could serve as a bridge between people and monsters so all races could live at peace. Mira, struck by emotion, forgets to deliver the final blow, letting the princess escape.

While Mira is enclosed in her bedroom, Stiltzkin arrives to the tower to pay a visit to his old friend Tonbetty. Mira discovers the meeting and sets out to punish them. A legendary hero and his apprentice arrive at the steps of the Flying Tower, postponing Tonbetty's and Stiltzkin's punishment after their defeat.

After defeating Hugh Yurg, Mira is ready to deliver punishment to Tonbetty and Stiltzkin, when Darklord Craydall appears and reveals he was the one who put Tonbetty at her service. Mira realizes her father has been the narrator this whole time, and expresses the resentment she feels against him. He tells her that the potential to become a great Darklord was always in her, so he could retire peacefully into the Crystal. Before leaving, he presents her with a last challenge.

Mira forgets about the punishment and embarks to the final confrontation against the king of the most prosperous kingdom. When Mira arrives at victory, between threats and mockery, she announces the end of her world-conquering campaign. She would like to work with the king to make the world a peaceful place for both people and monsters. That is, without giving up being the Darklord that she is, earning the title of Princess of Light and Darkness.

Sometime later, the rumor about the King's Seal spreads, an artifact with the supposed power to make whoever gains it the leader of the world. The rumor states the artifact is somewhere on the island Mira is vacationing at, so she races against other adventurers to claim it.

Later, Fiona reveals that her true intentions was to make Mira construct her tower in the spot where she could offer her a magnificent view as a present. Though the present is welcomed, it is implied that Mira ends up punishing Fiona for the trick.

Mira is an accomplished sorceress, with a great arsenal spells to either damage enemies or restore allies. However her biggest asset is the ability to Summon monsters and increase the number of floors to the Flying Tower. It is stated, however, her power comes from the Dark Crystal, so she need to stay close to it.

Mira makes cameo in one of the emblems for Layle's jacket: Coddled Princess, which is a chibi version of Tonbetty, a Tonberry, and herself. 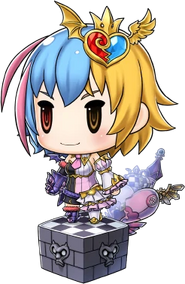 Mira appears in Final Fantasy Trading Card Game as a Lightning-elemental Backup card and as Dark- and Water-elemental Forward cards.

The name "Mira" is a Latin name that means both "Behold" and "Admirable".