Though their presence in Eorzea is lesser than that of the other races, the Miqo'te are easily distinguished by their large, projecting ears and restless, feline tails. The ancestors of this line first made their way to the realm during the Age of Endless Frost in the Fifth Umbral Era, traversing frozen seas in pursuit of the wildlife upon which they subsisted. Instinctual territoriality causes many among them to lead solitary lifestyles. Males in particular are said to shy from contact with others.

Miqo'te is a race from Eorzea in Final Fantasy XIV. They exhibit bestial traits, some similar to the Mithra of Final Fantasy XI, but unlike the Mithra, both male and female Miqo'te are available as player characters. Like the Hyur, the Miqo'te is an immigrant race to Eorzea. The in-game description for Sesame Seeds item indicates they originally came from the southern continent of Meracydia. In Norvrandt, Miqo'te are known by a different name; Mystel.

The Miqo'te have diverged into two ethnicities: the Diurnal Seekers of the Sun and the Nocturnal Keepers of the Moon.

The Seekers of the Sun are a patriarchal culture, with each tribe centered around a breeding male or nunh whose duty is to form a harem and lead his people to glory and prosperity. Young males are born and raised as "tia", and must either assume the position of nunh by defeating the existing nunh in single combat, or leave the community to form a harem of their own. In larger tribes, multiple nunh may coexist in the same community, although such cases are rare. The majority of Seekers worship Azeyma the Warden.

In contrast to the Seekers of the Sun, the family is the fundamental unit of Keeper of the Moon Society. Keeper tribes are often made up of two or three families who hunt together. The males are prone to wandering and the females believe men to be best in small doses. Keepers are often raised without the father, growing up in a more matriarchal society. The Keepers of the Moon have a custom of applying war paint to their faces, a symbolic message to their god that they are prepared to serve as warriors in the afterlife should they fall. It is believed the vivid colors also grant lunar powers. The Keepers offer their piety to Menphina the Lover.

Due to the differences of their cultures there are some physical differences between the Seekers of the Sun and the Keepers of the Moon.

Due to their exposure to light, the pupils of a Seeker of the Sun Miqo'te are vertically aligned slits with irises faintly colored. It is common for their eyes to be disparately colored from birth, a trait considered auspicious among their kind.

In contrast, due to their exposure to darkness, the pupils of a Keeper of the Moon Miqo'te are large and round with little iris exposure. They are distinguishable from their diurnal cousins by their darker fur, larger ears, rounder eyes, more pronounced canines, and longer, skinnier tails.

The groups share a superb sense of smell and powerful leg muscles, results of a long evolution geared towards hunting and predation.

The A Realm Reborn version brought some differences: for instance the Seeker of the Sun Miqo'te's ears are wider with thick hair, while the Keeper of the Moon Miqo'te have stylized ears with short hair and are slightly longer and thinner.

While the variation in Seeker skin color tends toward the more "traditional" tan coloration seen in many other races, darker-skinned Keepers tilt more toward blue and gray. This even affects the Keepers' lighter skin tones as a fair-skinned Keeper will still appear distinct next to a Hyur of similar skin tone.

Comparatively few in number, Miqo'te maintain an insular mentality within their clans, tending to avoid contact with the other races. Many lead isolated lifestyles, even when living in the more populous cities.

The Seekers are regarded as quick-witted and prone to action, and many bore easily. The Keepers are known for their reticent and brooding personalities. They are respected and sometimes feared for their tenacity.

The Seekers are diasporized across Eorzea; a few can be found in nearly every region, bar Coerthas. Limsa Lominsa boasts a substantial Seeker population, as they are drawn to La Noscea's warm-temperate climate and abundant sunlight. Many of the Seekers who have settled in Limsa have adopted most of its social mores, and do not follow the "traditional" clan hierarchy closely, if at all.

The other notable population of Seekers is in Thanalan's Sagolii Desert. While there are, of course, Seekers in Ul'dah (including the infamous Ul'dahn "dancing girls"), a number of Seeker tribes inhabit the southern parts of Thanalan, extending into the Sagolii. These tribes, in contrast to their urbanized cousins, tend to be stridently traditional, maintaining the social structure the Seekers have lived under for millennia and with an economy focused on hunting. The most famous tribe among adventurers is the "U", or Drake, tribe whose home, Forgotten Springs, is a good stop-over point for anyone venturing out into the desert, and the village sees a good deal of traffic (to mixed feelings from the U).

The G tribe, from which G'raha Tia hails, lives in Corvos far to the east of Eorzea, on the continent of Ilsabard.

There are also Seekers found in Dalmasca. As shown with Dyunbu pyr Potitus and Llofii pyr Potitus, Dalmascan Seekers do not follow the Eorzean tribes' naming conventions.

Keepers are generally found in the Black Shroud. They are divided between those who have made peace with the Gridanians and integrated into their culture (and can be found making up a not-insubstantial portion of groups like the Wood Wailers), and the other clans who still resist Gridanian "domination" and have carved out their own small domains in the forest, like the Coeurlclaws. The latter tend to engage in banditry to aid their survival, forcing them into further conflict with Gridanians, who worry their behavior will incite the wrath of the Twelveswood's elementals.

There are also Keepers in Thavnair, such as Ranaa Mihgo.

The Miqo'te were once a slave caste in the Allagan Empire before being placed on Corvos in the continent prior to the Fourth Umbral Calamity. But during the Age of Endless Frost, a majority of Miqo'te hunters travel to Eorzea among the influx of foreign fauna via an ice bridge formed at the time. Those Miqo'te settle in Eorzea, their descendants diverged into two physically distinguishable groups: the diurnal Seekers of the Sun and the nocturnal Keepers of the Moon.

The following images were taken from the Version 1.0 files. While the styles are available in A Realm Reborn, the new graphics engine may not render them exactly as shown.

The following table shows the attribute modifiers for Miqo'tes. These are flat modifiers and do not scale with level, only making a noticeable difference at low levels and very quickly becoming negligible as these attributes climb into the hundreds and thousands.

The default Miqo'te costume is one of Lightning's garbs. It is obtained from the chocobo girls in Yusnaan. One of the Miqo'te's unique poses serves as Lightning's victory pose

while wearing this garb.

Y'jhimei is a Seeker of the Sun Miqo'te from Eorzea who ends up in Eos through a dimensional warp gate in the Adventurer from Another World collaboration quest. She runs into Prince Noctis and his retinue, hiring them as "adventurers" to help her stop the summoning of a primal at the nearby Perpetouss Keep. After the quest, the party gets Eorzea-themed attires, Noctis's being Glamour Prism: Miqo'te, which styles him like a Miqo'te together with feline ears and a tail.

Miqo'te starting outfits will be available in the game as part of collaboration agreement between Square Enix and Sega.

Originally, players were able to play only as female Miqo'te. Males became playable since the Final Fantasy XIV: A Realm Reborn relaunch, though females remain more common among both players and NPCs. In the 1.0 version, while the busts of female members of other character races change depending on the face, the bust size of female Miqo'te depends on the sub-race (Seeker of the Sun, Keeper of the Moon). In A Realm Reborn the bust size option is independent of face.

The description of the Winded-up Mithra minion states that the Mithra are supposedly the ancient ancestors of the Miqo'te. 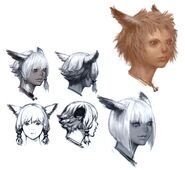 CG render of "the" CG Miqo'te in Bard AF; this actually is meant to be the same character as the previous, despite the different eye and hair color. 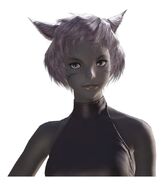 Keeper of the Moon.

Keeper of the Moon. 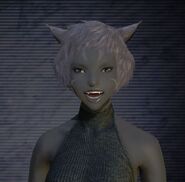 Keeper of the Moon fangs.

Seeker of the Sun.

Seeker of the Sun. 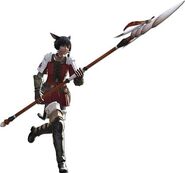 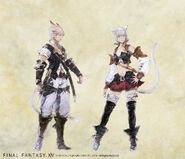 The CG Miqo'te during the End of an Era.

A Miqo'te in A Realm Reborn.

A Miqo'te in Thanalan.

A drake hunted by Miqo'tes in the Forgotten Spring, Thanalan.

Dulia-Chai, A Miqo'te residing at Eulmore

While the origin of the word "Miqo'te" has not been established, both sub-races have their own naming conventions.