Cid Pollendina: Oh, shut up and help me remodel the Minwu (Final Fantasy IV) page!
Please expand this article into a full one. The following tasks need to be completed:

William Frederick Knight
Minwu is a non-player character in Final Fantasy IV, and a playable character in its sequel, Final Fantasy IV: The After Years. He leads the town of Mysidia, which is populated by Black and White Mages. Minwu is an experienced mage himself, and also a close friend to the wandering Sage Tellah. He is knowledgeable in the Mysidian Legend that speaks of the Chosen One come to save the world.

While all game releases refer to him as just the Elder of Mysidia, he is named Minwu in the Japanese exclusive novelizations of Final Fantasy IV. [1] He is thus named after the White Mage Minwu from Final Fantasy II.

Minwu is an elderly man with a long brown beard. He is bald on the top of his head, and the rest of his hair is long and flows down his back. He has brown eyes. He wears a long purple robe and a necklace with a red pendant.

Minwu is a forgiving and kind-hearted man, with a strong sense of righteousness. He is willing to forgive the repentant Cecil Harvey despite the crimes he had committed in Mysidia prior, seeing in Cecil's eyes that he is sincerely sorry. When acting as a mentor for younger mages he is strict, giving Palom extra homework for skipping class.

Before the events of Final Fantasy IV[edit | edit source]

Twenty years before the events of Final Fantasy IV, Troia was under constant monster attacks and was on the verge of being destroyed. In response to the attacks, Tellah and Minwu were sent to the region to deal with the creatures. After successfully defeating the monsters terrorizing the country, the two mages aided the city by teaching the citizens magic in order to defend themselves. When teaching the Epopts magic, the young women refused to learn Black Magic, as they saw it no more than a force of destruction, and would only allow their kind to learn the arts of White Magic. [2]

When Cecil Harvey leads the Red Wings into Mysidia to steal the Crystal of Water Minwu surrenders the Crystal before too many mages are killed, but becomes embittered with Baron, and seals the Devil's Road leading there from Mysidia.

When Cecil returns after being attacked by Leviathan, Minwu says that apologizing will not bring back the dead. He sees in Cecil's eyes that he is truly sorry and understands Cecil is reformed and wishes to take on Golbez. He tells Cecil that only the Holy Knight can defeat evil and sends Cecil to Mount Ordeals to become a Paladin with the twins Palom and Porom as escort and guide. as well as to spy on him to ensure his intentions are pure. Cecil completes the objective and returns with the Mythgraven Blade.

Minwu is surprised Cecil wields this sword, and concludes Cecil is the Chosen One passed down in the Mysidian Legend. He notices that Tellah, the great sage, is traveling with Cecil, and warns him not to fight with a vengeance or to use Meteor. Minwu reopens the Devil's Road leading to Baron, and enters the Tower of Wishes to pray for Cecil's safe and successful journey.

After Golbez has gathered all the Crystals, Cecil returns to Mysidia, and Minwu asks him to pray with him. The prayers of Cecil, Minwu, and the mages summon the Lunar Whale, a legendary airship that can travel to the moon. Minwu goes to Baron Castle to heal Palom and Porom's petrification, who had turned themselves into statues willingly to protect Cecil and their other friends. He appears on an airship in the attack on the Giant of Babil alongside the twins. Afterward, Minwu leads a service in the Tower of Wishes where everyone prays for Cecil's safety. Thanks to these prayers Cecil and his friends defeat Zeromus and restore peace.

Later, Minwu teaches magic to Palom and Porom, and assigns Palom extra homework for skipping class. He takes the twins to Cecil and Rosa's wedding.

Minwu is one of many attendees at Damcyan to celebrate its reconstruction. When monsters begin to pour out of the Sealed Cave, the Elder tells Palom and Porom to do whatever they can to help.

When Porom leaves Mysidia to seek help from Kain at Mount Ordeals, Mysidia is attacked by the Mysterious Girl and her monsters. Minwu joins Porom in a fight against the Mysterious Girl to defend the Crystal, but he is hit by Ramuh's Judgment Bolt after the Mysterious Girl summons him. Minwu stays in bed after the attack, recovering from his injuries. After Cecil and their friends defeat the Creator, Minwu passes on the title of Mysidia's elder to both Palom and Porom.

Minwu is temporarily playable during the end of Porom's Tale in The After Years. If the player adds him to the party using codes, his class title is simply given as "Mysidia Elder". As with Golbez in the 3D remake versions of Final Fantasy IV, the player cannot view the Elder's portrait in the original versions of The After Years unless they add him to their party with codes.

He has access to all White Magic except Holy and Arise.

He has no equipment except for a Staff in his right hand. 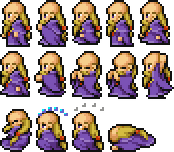 Battle sprite (Wii).
Add a photo to this gallery