Cid Pollendina: Oh, shut up and help me remodel the Minwu (Dimensions II) page!
Please expand this article into a full one. The following tasks need to be completed:This request can be discussed on the associated discussion page. Remove this notice upon completion.

Light
Minwu is a non-playable character in Final Fantasy Dimensions II. He is the Grand White Mage of Mysidia and the adoptive caretaker of Chronos and Kairos.

Minwu appears as a youthful elven male. He has long blonde hair and pointed ears. His outfit is based on the traditional White Mage ensemble, consisting of a long white robe with red triangular lining, and wearing a silver circlet on his forehead.

Minwu is seen as an inspirational figure in Mysidia, being knowledgeable and caring to all individuals. After adopting Chronos and Kairos, Minwu immediately showed his caring side the moment he took them in, which made the twins see him as an elder brother of sorts. Even after Sorgue was exiled from Mysidia, Minwu showed genuine concern about his old friend, despite the former being hostile towards him.

Minwu does have his playful side, especially towards Sorgue. When reminiscing about their time in the Magic Corps, he even went as far as having the latter join him in reenacting their old roles.

Life with Chronos and Kairos[]

Prior to the events of the main scenario, Minwu adopted both Chronos and Kairos by order of King Doga and Unei. Minwu welcomed the twins with open arms and taught them magic within the White Mage Tower. During their time under Minwu's care, the three began to form a bond, with the twins seeing him as an older brother figure.

Sometime later, Chronos and Kairos began working on the creation of the Crystal of Time with time magic. After Doga and Unei are informed of their research of time magic, Doga decided to allow the twins to continue their work, but he regretfully decides to confine the two within the Crystal Temple. The initial announcement of Doga's orders, angers Minwu to the point to speak out against him, begging him to reconsider. However, Chronos and Kairos decide to listen to Doga and thank Minwu for everything he has done for them. Minwu hearing their words, reluctantly accepts the events.

After losing the twins, Sorgue was eventually exiled for his research in immortality magics, which caused a further rift between the two friends.

Once Morrow and his friends arrive in Mysidia, they are instructed to meet with both Minwu and Vivi in their respective towers in order to learn of Chronos and Kairos's whereabouts.

At the White Mage Tower, Minwu greets the Lost Lambs and inquires them for their reason to meet with Chronos. Morrow mentions that they are friends with her, shocking Minwu to learn that Chronos has friends, which causes him to reminisce about Sorgue. Confusing the party, Minwu clarifies that Sorgue and him were once friends. Minwu then informs the group that in order to meet with the twins, they would need to meet with Vivi and then the Mage King, and gives them admission into the Black Mage Tower.

I pray for the day when we can all live together again...

Minwu's message to Chronos and Kairos.

After defeating Sorgue in the Middle Ages, the party meets with Minwu once again at the White Mage Tower. Minwu tells the group of his time as the caretaker for the twins, and how they eventually became his reason for living. However, he then informs them of Doga taking the children into his custody to watch over their research of time magic. Before the group leaves their meeting with Minwu, he asks them to deliver a hopeful message to be reunited with them once more. Jornee assures to him that they will deliver his message to the twins.

On the day of the Mysidia Crisis, the party arrives at the Crystal Temple to find Doga, Unei, and Vivi defeated by Sorgue and his army of the undead. Doga and Unei inform the group that Minwu chased Sorgue into the Crystal chamber to protect Chronos and Kairos. The party shocked, gives chase to Minwu and Sorgue.

Deep inside the Crystal Temple, the party finds Minwu confronting Sorgue. Minwu tells Morrow and his friends not to interfere in their fight, much to their dismay. Minwu questions Sorgue if he is doing all of his actions to overthrow Doga and Unei, Sorgue in response reveals that he is only doing this to stop Chronos and Kairos from working on the forbidden time magic. Minwu points out the hypocrisy of the situation, due to Sorgue's research in immortality magics, which causes him to argue of time magic's danger of changing the fabric of history. Not wanting to hear more of Sorgue's words, Minwu decides to fight to defend the twins, unleashing a barrage of white magic on his former friend. Sorgue, now immortal, is able to avoid being damaged by the magics, and unleashes a counterattack of black magic on Minwu. As Minwu falls to the ground, Sorgue mocks him and gives him the assuring words that he and the twins will be reunited in the afterlife soon. Minwu during his final moments, tells the party to save Chronos and Kairos. Despite the situation, Morrow assures to Minwu that they will stop Sorgue and save his family.

Being the Grand White Mage of Mysidia, Minwu is knowledgable in the arts of white magic. While not ever present in combat, he exhibits his prowress in white magic in certain cutscenes, having access to spells such as Holy, Banishga, and Ultima. 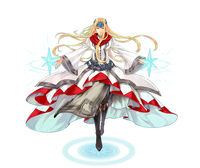 In Final Fantasy Legends: Toki no Suishō, Minwu's original sprite had subtle differences, donning a shorter length robe that exposed his feet. In addition, his sprite had a more flat face and less detailed eyes.

Following the release of the Legends II update, Minwu's sprite was changed to the version used in the premium release.

His signet was as SSS rank god-tier light-elemental summon. The Minwu god signet was released during the final months of the free-to-play version and could only be obtained by participating in the "Fat Chocobo Bird King" raid. The rank of the signet depended on the player's ranking in the event.

The signet taught the same abilities as in the premium release and could be equipped by all party members.

[view · edit · purge]Ming is a Chinese name directly translated as "enlightenment", while Min means "clever" or "sharp". The alternate transliteration, Minh, is Vietnamese, but means the same thing.

The name "Minwu" bears a resemblance to Menw. [view · edit · purge]Menw was King Arthur's court magician and counselor who often traveled with and accompanied him on his quests.