A Mirage that uses a giga-sized hammer to clobber its foes. When he charges with Bulldozer, get out of the way, because punching this bull in the gut on the third hop isn't going to send him to the mat. (Maybe he's just not bald enough.)

Minotaur is an enemy in World of Final Fantasy. 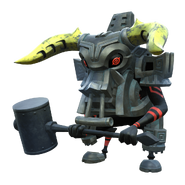 Retrieved from "https://finalfantasy.fandom.com/wiki/Minotaur_(World_of_Final_Fantasy)?oldid=3402088"
Community content is available under CC-BY-SA unless otherwise noted.