Rich in mineral resources, the Felmarian Highlands where the town lies are also battered by year-round snowstorms.

The Mining Town of Gollund, also known as Goland Coal City (炭坑都市ゴルランド, Tankou-toshi Gorurando?), is a location in Final Fantasy Tactics. It is located south of the Royal City of Lesalia and contains a large coal mine. Ramza Beoulve rescues Orran Durai from several thieves here, and later returns with Beowulf Cadmus, entering the coal mines to find Reis Duelar, who has been turned into a dragon.

Of important note, the PlayStation Portable version is restored to its original Japanese difficulty, and is thus harder than the North American PlayStation version. Orran's stats are much lower, making him easier for the enemy to KO.

The party rescuing Orran from the thieves.

An underground passageway beneath Gollund, as shown in a cutscene. 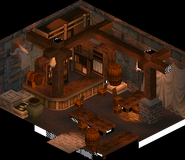 The inside of Gollund's pub, visited during a sidequest.

The entrance to the colliery.

Continuing through the colliery.

Later in the colliery.