A Mirage that uses its hard shell to protect companions from attack. But flip these sheldons over and they will shed soft turtle tears. They're quite young, so maybe mini-boy-toise would be more appropriate. (...Or maybe not.)

Minimantoise is an enemy in World of Final Fantasy.

Once per battle: Reduce HP; requires a minimantoise prism. 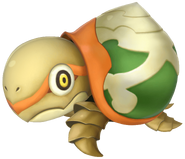