Mini Dragon is an enemy in Final Fantasy V. They always appear in groups of five and are a challenge to most players. They give the most Experience in World One and are considered super-enemies. They can be found in the forest near Istory on the world map.

A caught Mini Dragon will cast the powerful Holy spell when released.

Mini Dragons resist damage from most weapons and spells available in the first world, and they have high evasion. They use Frostbite to deal Ice damage to all party members.

It is best to focus on one dragon with powerful physical attacks and magic spells, healing every round. Toad can be used against the group, one just has to make sure not to cast it on Mini Dragons that have already changed into Toads.

A Ninja can throw two Flame/Water/Lightning scrolls for an easy win.

A Blue Mage can use Aqua Breath for a good amount of damage to a group; it should take 2 to 3 castings to defeat them all.

Berserkers are also effective, since axe and hammer attacks ignore 3/4 of the target's defense stat. However, these weapons often miss due to the dragons' high evasion.

The Flame Ring, available from the nearby town Istory, nullifies the dragons' "Frostbite" attack for the equipper. Given its high price of 50,000 gil, it is unlikely the player can afford more than one at this point in the game, so it should be given to the party member with the lowest magic defense stat. 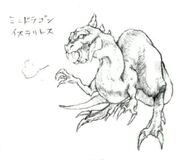