Mini (ミニマム, Minimamu?, lit. Minimum) is a recurring White Magic spell in the series. It inflicts the status of the same name, and is often found within the game's first quarter.

The spell Mini is a White Magic spell which attempts to inflict Mini on one or all enemies. The success rate increases with the spell's level. Any character can learn Mini by having them use the Mini Tome (Mini Scroll in Final Fantasy Origins).

The effect of Mini is very different on the heroes or on the monsters. When a hero is miniaturized, his/her physical attack power is reduced significantly. There is a chance of recovery at the end of each turn and the status does not last after battle. It can be cured by Basuna at level 4 or higher. Monsters in mini status are instantly defeated: strictly speaking, they don't die, they just leave the battlefield, but characters still earn Gil and experience.

Mini is a level 2 White Magic spell that can be bought in Gysahl for 700 gil, and is first received from Desch after freeing Bahamut on Dragon's Peak. It can be used by the White Mage, Sage, Ranger, Red Mage, Devout and Mystic Knight classes.

The effect of Mini differs depending on whether it is afflicted on the heroes or on the monsters. When a hero is miniaturized, his/her physical attack and defense stats are reduced to 1, all attacks and spells used against them have 100% accuracy, and damage from all sources is doubled. When a monster is Mini'd, it will instantly be defeated like in Final Fantasy II.

The party needs to be in Mini status to access the town of Tozus, to leave the prison in Castle Hein and to navigate some of the dungeons (Tozus Tunnel, Nepto Temple, Cave of the Circle). In the 3D version, the boss Gutsco is capable of casting this spell on the entire party.

In the Easy Type version, the casting time was reduce to 2.

Mini is a White Magic spell known initially by Rosa and Porom. It inflicts Mini to a single or multiple target at the cost of 6 MP.

Mini is known initially by Rosa and Fusoya, and learned by Porom (level 31) and Leonora (level 32). It costs 6 MP to cast.

Mini is a level 2 White Magic spell, bought in Phantom Village for 300 gil or found in a chest at Catapult. It costs 5 MP to cast. It is one of the spells that can be cast from the Wonder Wand for free.

Mini can be cast by Fury, Omniscient, Ramuh, and Tiny Mage.

The Transform Materia has Mini as its Level 1 spell. It costs 10 MP to cast and has the success rate of 72%. When cast on an already affected target, it heals the status with 100% accuracy. The enemy Hungry and the boss Godo are the only enemies to utilize the spell.

Dagger and Eiko can cast the White Magic Mini. It costs 8 MP to cast and 40 AP to master, and can be learned through Magic Racket, Asura's Rod, and Feather Boots. It can be reflected and works with Return Magic. It is used by Ozma and Quale. The spell has a base 50% accuracy, unless when cast on a target already in Mini status, in which case the spell will always heal the status.

Minimize is a Magic Stone which causes all of the other racers on the track to decrease in size and speed. It can be powered up twice to enhance its effect.

This section in Chocobo's Dungeon 2 is empty or needs to be expanded. You can help the Final Fantasy Wiki by expanding it.

Mini is a technique that appears in Kingdom Hearts Birth by Sleep and Kingdom Hearts 3D: Dream Drop Distance. It inflicts the Mini status on enemies. Minimized enemies can be damaged by being stepped on.

Mini1 cast on the party in Final Fantasy II (GBA). 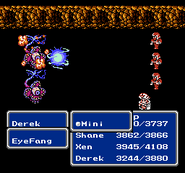 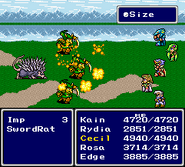 This gallery is incomplete and requires Final Fantasy IV: The After Years and Final Fantasy XIV added. You can help the Final Fantasy Wiki by uploading images.
White Magic
Deutsch 日本語
Community content is available under CC-BY-SA unless otherwise noted.
Advertisement