MiniMog is a pseudo-Guardian Force in Final Fantasy VIII, summoned with the command "MiniMog" learned by any GF through the item Mog's Amulet, received from the PocketStation game Chocobo World (original versions) or Angelo Search (Final Fantasy VIII Remastered). Summoning MiniMog is the only way to heal Guardian Forces during battle.

MiniMog is a redesigned moogle for Final Fantasy VIII. It is more feline in appearance and doesn't have a pom-pom like moogles usually do. It is cream-colored and has purple eyes and small purple bat wings. It has a tuft of fur on its chest and cheeks. Though cat-like, MiniMog is bipedal like moogles from previous games.

The Mog's Amulet item teaches the command ability MiniMog to a Guardian Force, which can then be assigned to a character in battle. Mog's Amulet is only obtained from the Chocobo World minigame in the original versions, an add-on playable on PocketStations in Japan, or included in the PC versions. Chocobo World is removed from the 2019 remaster, and Mog's Amulet is thus found via Angelo Search instead with improved chance of getting one.

To get items from Chocobo World, the player must visit a Chocobo Forest once Balamb Garden becomes mobile and find the chocobo mother, and the hidden treasure for that forest to unlock Boko. The player must play Chocobo World as Boko until encountering MiniMog in a random event. He can take a long time to find, but he will join Boko's party as either a fighter or a sleeper. The player should transfer Boko, MiniMog, and an A Rank item received from a Cactuar over to Final Fantasy VIII. With luck, it will be Mog's Amulet. The player can use Mog's Amulet on any GF to learn the MiniMog command, which takes up a slot on a character's command list. Boko and MiniMog must currently be in the Final Fantasy VIII world and not Chocobo World to summon him via the MiniMog command. A message stating that MiniMog is not here, means he is in Chocobo World and must be transferred over.

The player must find MiniMog in an event in Chocobo World to be able to get a Mog's Amulet. In a random event after level 10, the player may encounter MiniMog who offers to help Boko in battles or simply SLEEP, which prevents MiniMog from ever leaving the party. If MiniMog is set to STANDBY, he will attempt to save Boko when Boko's HP reaches 0 in battle. If MiniMog fails to defeat the enemy, he will leave the party. The chance of reencountering MiniMog after his departure is much higher than the chance of the initial meeting. MiniMog may also appear randomly on extremely rare occasions to give stones for Boko to level up.

In Chocobo World a type of event is Cactuar finding items. Cactuar appears on the event screen and gives Boko one of four items, labeled A, B, C, and D that can be imported to Final Fantasy VIII. Depending on the player's rank, the probability of Cactuar finding D rank items is greatest, but they are among the most common items (e.g. basic status recovery items). Conversely, the probability of Cactuar finding A rank items is lowest, but they are very rare. Mog's Amulet is a rank A item. 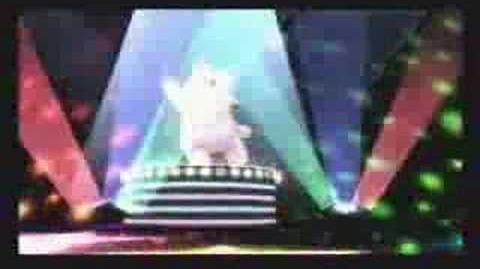 When summoned, MiniMog performs Moogle Dance, which revives any fallen GFs and restores HP to all GFs junctioned, but costs gil (party's average level times 100). This is the only way a player can heal GFs during a battle. The formula by how much HP MiniMog restores to the party's GFs is unknown.

MiniMog is a Level 8 GF Card in Triple Triad used for playing the minigame and for turning into 100 Pet Houses with Quezacotl's Card Mod. It is won from the boy in a blue shirt who runs laps round the central elevator in Balamb Garden, and is thus one of the first rare cards the player can acquire. The card is also used for the Queen of Cards sidequest. 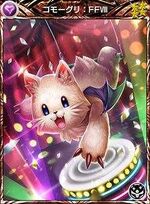 MiniMog can appear in a random Chocobo World event and joins the party. MiniMog is the adventurous friend of Boko, the chicobo. The game's primary quest is to find MiniMog, who has gone missing during his latest adventure. After discovering MiniMog, the player will be able to obtain Mog's Amulet, allowing MiniMog to be summoned in Final Fantasy VIII if certain conditions are met.

Mog is a recurring name for a moogle in the series. In Japanese, MiniMog is known as "young moogle". [view · edit · purge]The moogle's Japanese name, Mōguri (モーグリ), is a portmanteau of the words for mole (土竜, mogura?) and bat (蝙蝠, kōmori?). "Moogle" is the localized version of Mōguri, losing the pun, though "moogle" has started to appear in Japanese sources as well.