Minerva is a character from Crisis Core -Final Fantasy VII-. She is implied to be related to Gaia's consciousness, and is interpreted by Genesis Rhapsodos as the goddess of LOVELESS. 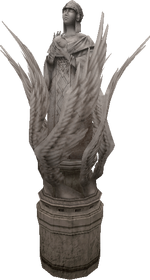 The nature of Minerva's existence is unclear. In the mission chaining leading up to her, Shinra corporation detects her as "an incredibly strong summon signal", and the Crisis Core Complete Guide says Minerva is similar to a summon in substance. Despite this, Minerva is not shown to be associated with a Materia shard as other summons are. Given the nature of Materia, she may be summoned directly from the Lifestream instead.

An avid fan and studier of LOVELESS, Genesis Rhapsodos believes the object the three heroes are searching for in the text, the Gift of the Goddess, could cure his degradation. Genesis attempts to recreate the conditions of LOVELESS to come to the Gift. After fighting Zack, Genesis realizes the "Pride of a SOLDIER" is his Gift of the Goddess.

Minerva is the game's superboss, appearing in Mission 9-6-6 as the final opponent in the Great Cavern of Wonders. Defeating her earns the Divine Slayer accessory. Re-challenging the mission allows players to battle her again.

The battle for the fight against Minerva is "The Summoned", a remix of the Final Fantasy VII boss theme, "Fight On!", that is used for battles with summoned monsters in Crisis Core -Final Fantasy VII-.

Minerva appears with her Tetsuya Nomura artwork in a shine-elemental card.

Full view of Minerva in an FMV.

The Goddess Statue in the Japanese version of Crisis Core.
Add a photo to this gallery

[view · edit · purge]Minerva is the Roman pantheon equivalent to the Greek goddess Athena. Her name is thought to be a mishearing and a corruption of the Latin word "mens", meaning "mind."