Minerva is a character from Crisis Core -Final Fantasy VII-. She appears to be a supernatural being who is implied to be related to Gaia's consciousness, and is interpreted by Genesis Rhapsodos as the goddess of LOVELESS. She makes a brief appearance in the story and can be fought as a superboss.

Minerva appears to both Genesis and Zack as a blonde-haired woman wearing elaborate gold and blue armor with a flowing white dress, but the mysterious goddess statue is also taken to represent her.

In her human form, Minerva has pale green eyes, like the color of the Lifestream itself, and wears a detailed gold and blue headdress on her forehead. Minerva's attire has numerous angel-wing motifs, and large golden wing ornaments with white fabric hanging down, giving the silhouette of flowing wings. She wields an ornamental spear and a colossal round shield with golden ornamentation. The breast of her suit of armor has a large ornament in the shape of white bull's horns, and under it is a large red orb—perhaps a gem, crystal or a materia. Though her suit of armor is massive, she is light on her feet and appears to glide rather than walk. Her visage is covered by a golden helmet in her superboss appearance.

Comparison between Japanese and international versions of the goddess statue.

A goddess-like statue below a colossal orb is placed in the Banora Underground where the light breaks through the cave ceiling. The Crisis Core Complete Guide states the statue was part of Genesis's plan to reenact LOVELESS. This statue shatters after Minerva's meeting with Genesis. The Minerva Statue seen in the Banora Underground was redesigned from the Japanese version of the game for its overseas releases, as the original model resembles depictions of the Virgin Mary (most likely to avoid connection with Christianity). The giant materia perched above the statue is known as the "goddess materia".

The nature of Minerva's existence is unclear. In the mission chaining leading up to her, Shinra corporation detects her as "an incredibly strong summon signal", and the Crisis Core Complete Guide says Minerva is similar to a summon in substance. Despite this, Minerva is not shown to be associated with a materia shard as other summons are. Given the nature of materia, she may be summoned directly from the Lifestream.

An avid fan and studier of LOVELESS, Genesis Rhapsodos believes the object the three heroes are searching for in the text, the gift of the goddess, could cure his degradation. Genesis attempts to recreate the conditions of LOVELESS to come to the Gift. After fighting Zack, Genesis realizes the "Pride of a SOLDIER" is his gift of the goddess.

Minerva is the game's superboss, appearing in Mission 9-6-6 as the final opponent in the Great Cavern of Wonders. Defeating her earns the Divine Slayer accessory. Re-taking the mission allows players to battle her again.

The battle theme for the fight against Minerva is "The Summoned", a remix of the Final Fantasy VII boss theme, "Fight On!", that is used for battles with summoned monsters in Crisis Core -Final Fantasy VII-. 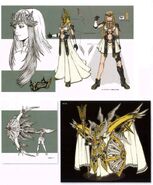 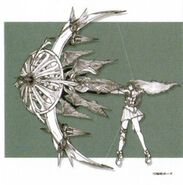 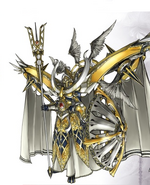 Full view of Minerva in an FMV. 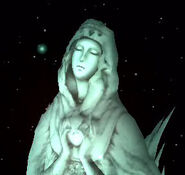 The statue in the Japanese version.

The goddess materia and the statue.

[view · edit · purge]Minerva is the Roman pantheon equivalent to the Greek goddess Athena. Her name is thought to be a mishearing and a corruption of the Latin word mens, meaning "mind".