Gravity
Mindblow is Barret's second level 1 Limit in Final Fantasy VII. When fired, it depletes all of the target's MP. The attack is treated as Gravity-elemental.

When performing Mindblow, Barret charges up a blue fireball before releasing it at an enemy.

Mindblow is obtained by performing Big Shot nine times. Barret can equip the Cover Materia to speed up this process, causing him to take more damage in battle, thus increasing his Limit gauge and using the ability faster. Using a Hyper will make his Limit gauge fill faster and use Big Shot more often. 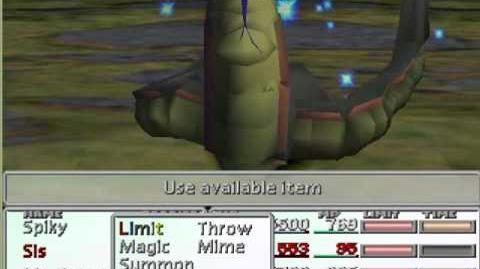 Mindblow is treated as a Gravity-elemental attack, and depletes all of an enemy's MP. Because many bosses are immune to Gravity, Mindblow is best used against larger normal enemies. It is one of the few abilities that can deplete an enemy's MP, though as it is a Limit it's of dubious utility. As Mindblow does not cause HP damage, Big Shot is the better option in most cases. One use is to cross the marshes to the Mythril Mine without catching a Chocobo, as the player can render the Midgar Zolom unable to use Beta with the skill (though this means the player can't learn it as an E.Skill, either).

Mindblow is a unique ability for Barret, though ultimately, its niche means that the player is better off equipping higher level Limits when available, and Mindblow is not a priority to obtain.