This opulent mimic miss is covered with expensive-looking gems. If there's a mimic queen, where's the mimic king? Hey, that's what she wants to know!

Mimic Queen is an enemy in World of Final Fantasy. 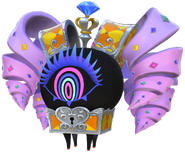 World of Final Fantasy: Meli-Melo.
Add a photo to this gallery

Mimic is the process of observing and replicating another's behavior, also called imitation.

Retrieved from "https://finalfantasy.fandom.com/wiki/Mimic_Queen_(World_of_Final_Fantasy)?oldid=3423069"
Community content is available under CC-BY-SA unless otherwise noted.