Mimics (ミミック, Mimikku?) are an enemy in the later section of games in the Final Fantasy series. They take the appearance of treasure chests or other objects, and once triggered, burst out as an enemy. Mimics replace monsters-in-boxes, treasures that trigger battles when interacted with in the early series, although Final Fantasy X has both kinds.

The Mimic appears disguised as a treasure chest. One of its abilities is "Call", which will summon the Magic Vice enemy into battle. The Mimic can call more if the last one was defeated. They can be found in the mansion of Burmecia impersonating treasure chests.

The Mimic appears as a normal treasure chest in battle. If the Steal command is used, the message "Nothing to steal" will appear and it will transform into the fiend, which is rather difficult to kill. While in its treasure chest form, attacking it will kill it as it has very low HP in this form.

The player does not know if it is a real chest or a Mimic. If the player uses Mug instead of Steal, they will kill the Mimic while still in its weak chest form, or take whatever treasure may be inside if it is a real chest. Mimics only appear within the Omega Ruins and there are four different types. 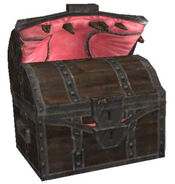 There are several different ways to encounter Mimics. The first is to be a Thief and to unsuccessfully pick a lock. If a lock is failed to be picked, the chest will transform into a Mimic. In Pso'Xja they can be encountered as normal enemies and they are available in some Aht Urghan mercenary Assault Missions or to venture into a certain Burning Circle Notorious Monster fight where it is required that you fight a mimic.

Some treasure urns turn out to be mimics and attack the party when interacted with. They are first found at the Barheim Passage, and are usually found in underground or indoor areas, such as the Henne Mines and the Lhusu Mines. They are usually a slightly different color to the normal treasures, and can be quickly identified as monsters. Various different versions exist, some Rare Game and even the superboss Omega Mark XII.

The mimics in the Barheim Passage feed on electricity, a power source that in modern times has fallen out of favor in exchange for magicite-based power sources.

The mimics appear to be man-made creatures made intentionally to look like treasure coffers. Their creation is chronicled in the back pages of the Urutan-Yensa bestiary entry. The inventor was hired to create a weapon powerful enough to slay a mighty dragon, but the relationship between the inventor and the client went awry and he released the mimics, now able to reproduce on their own via mothers that lay eggs.

The Mother is complete, and continues Her growth. So too grows her Brood, for daily she gives birth to small larval Weapons. Like their Mother, they too must have the Appearance of small Coffers. 'Tis much like the laying of Eggs one might witness in the Wilds, and as such is quite fascinating, yet at this Rate my Laboratory will soon be filled with Coffers. Returning current stock to Storage.

The other variants are:

The Mimics appear as normal treasure chests until a group leader tries to open it. Its basic command is a weak physical attack which makes it less threatening than previous appearances.

Mimics appear in the Lost City of Amdapor as a potential hazard; players must choose the correct box at two points to avoid being attacked. Several "Treasure Coffers" appear in Hullbreaker Isle that are Mimics, however some of these must be slain to obtain Stone Tablets needed to open a door to the second boss.

A diminutive Mimic called "Treasure Box" can be obtained as a minion by purchasing from Hunt Billmasters.

Mimics may appear from treasure chests in the Palace of the Dead. They're especially infamous for their Infatuation ability, a single-target cast that will inflict a Cursed Pox status ailment, a ten minute debuff causing damage over time while decreasing the target's stats. This can be interrupted with Interject. Mimics only appear from gold-branded chests and may drop one if defeated, however there is the occasional odd moment where due to how Mimics can appear from any gold chest, a mimic dropping a chest might end up being another mimic, potentially causing a bizarre loop of mimics carrying mimics.

Mimics are sometimes summoned by Judges in Clan Trials, and retain their status of Monster in a Box.

The Mimic is an enemy found within the Cara Mountain Range, Cave of Medusa, Gaia Pass, Glaive Castle, and Old Mine. They have a chance of inflicting Dark per hit.

Mimics appear as normal treasure chests. They appear as insect-like creatures that appear from under the chest.

Mimics are encountered in Rebena Te Ra for all cycles. They appear as harmless chests until they feel threatened and turn into very aggressive monsters.

Mimics take on the appearance of regular brown treasure chests, until they reveal their single eye and purple claws when approached.

Mimics appear as scorpions with the Khalam Medal design on their backs. Thus, they can lie in wait for adventurers to pass over them and "collect" them. only to brutally attack them. Defeating a Mimic does not give up the Khalam Medal it resembles. Though a true Khalam Medal may lie elsewhere in the quest, a Mimic's demise still nets EXP and zell for the player.

The Spiderchest is, if not an official appearance, a very strong reference to the Mimic. It disguises itself as a chest and will attack the player should any attempt to open it be made. In the Final Mix version, a palette swap called Flame Box appears.