Mimic (ものまね, Monomane?), also known as Mime and Copycat, is a command ability in several Final Fantasy games. It is the signature ability of the Mime class, allowing a character to copy a previous command, whether it be from themselves or an ally's, and typically does so without expending MP or, in case of using items, without actually expending the item from the inventory.

Mimic is the Mime's main command ability, learned for 999 ABP.

Mimic allows the Mime to repeat the previous action with no MP or item consumption, though the commands that have random outcomes remain random and mimicking Zeninage still uses up money. The mimed action depends on the Mime's stats, not the character they're miming.

Gogo's special ability is Mimic that lets Gogo mime the last action used. When mimicking spell use (including espers), Gogo uses no MP, and when mimicking item use or throw, no items are expended from the inventory. However, mimicking Gil Toss still uses up gil. If Mimic is used directly after Interceptor counterattacks for Shadow, Gogo will call Interceptor for the same attack. Gogo cannot mimic Desperation Attacks. If nobody has taken any action yet, and Gogo uses Mimic, Attack will be used.

Mimic is a command that that copies the last action taken in battle and can be used by equipping the Command Materia Mime or Master Command. The user can mimic his/her own Limit Breaks, and the Materia can be linked with Support Materia for interesting results, such as linking it with multiple Command Counters to counterattack an attack with multiple Limit Breaks. Mime mimics the results of Tifa's and Cait Sith's Limits, so the player won't need to spin the slots reels again. Mime works on spells that fail due to lack of MP.

Copycat is a Special ability that mimics an ally's previous command for the MP cost of 28. It is located near the end of Rikku's section of the basic Sphere Grid and the start of Lulu's section, but a Lv. 4 Key Sphere is needed to access it. Characters cannot mimic each others' Overdrives or Yuna's summoning.

Copycat takes MP to use, but can be made useful for mimicking actions that would otherwise take more MP to perform, such as Doublecasting Ultima or Death for getting rid of weaker enemies faster. Copied attacks are subject to Copycat user's weapon abilities, such as Magic Booster and Magic Plus % factors. Copycat is thus not identical to the copied move, but is its own command; e.g. if a character copies Quick Hit or Quick Pockets, they will merely use a regular physical attack or an item, without getting their next turn faster, because the Copycat command doesn't have this "bonus".

When fighting the Mimic enemies in Omega Ruins, Copycat is nullified.

Colibri may cast any spell cast upon them within the last 30 seconds. They will cast the spell either onto the character who cast upon them or onto the member of the group with the greatest enmity. Abilities cannot be copied, only magic (including songs, Ninjutsu and Blue Magic).

Introduced in 5.2, Blue Mages can learn the spell Aetherial Mimicry from the Corruption enemy found in the Ghrah Luminary boss fight in Pharos Sirius (Hard). By targeting another player, regardless of whether they're in a party, they can mimic their current role characteristics. For example, mimicking a tank class player significantly raises their defense to match that of a tank and they generate more enmity than usual.

Within the Bozjan Southern Front there is a lost action called "Mimic" a player can use Mimic on another player and copy their lost actions as well as giving the player the max amount. It is a single use ability and is obtained from Forgotten Fragments of Caprice.

The Mime cannot actually use the Mime's action ability, since it will copy a unit's actions the second it sees them.

Bartz Klauser's battle style is based on mimicking and combining two of his comrades' abilities, while his HP attacks are integral imitations of some of his allies'.

Mimicry is Bartz Klauser's battle style, which has suffered heavy changes since the original game, as many of his combos were replaced or changed to include abilities from new characters to Dissidia.

This section in Dissidia 012 Final Final Fantasy is empty or needs to be expanded. You can help the Final Fantasy Wiki by expanding it.

Mimic is a special ability learned by Bartz (level 75), Vaan (level 55), and Cosmos (level 5). Costing 8 CP to equip, Mimic activates when the player gets Good or better on 125 Triggers, and copies the effects of the last abilities activated.

Mimic is a reactive ability that costs 8 CP to equip. It is activated by receiving GOOD or better 125 times. It mimics effects of last reactive ability and cannot mimic probability-type abilities. It is learned by Bartz (level 30), Yuffie (level 5), Yuna (level 25), Vaan (level 35), Ramza (level 45), and Cosmos (level 10).

Mimic appears as an ability effect, limited to Soul Breaks and Burst Soul Break commands. Only abilities, the Attack command, and the Defend command can be mimicked. Other Soul Breaks, Roaming Warriors, abilities that cause the user to jump into the air, and Burst Soul Break commands cannot be mimicked, and are not counted as the last action performed. If no actions that can be mimicked have been performed in the battle, the user will instead perform a physical attack that is 50% more powerful than a standard attack.

Silence still prevents the afflicted from using magic, even if used through Mimic. Mimicked actions cannot be dualcast, and are not affected by charge time reduction factors that only affect specific schools of abilities. They also gain Soul Break points as normal; for example, using Lifesiphon through Mimic will still grant 150 Soul Break points.

The following abilities have the Mimic effect:

Two Mime cards have effects based on Mimic. A card depicting the Tactics female Mime allows the player to choose a Forward in their party after they have attacked, and for the rest of the turn the Mime has the same Power as that Forward. Another card showing the male Tactics Mime has a similar effect, granting it the same Power as the opponent's weakest Forward until the end of the turn, for a cost of one Water CP.

Gogo's cards allow him to Mimic the abilities of other cards in different ways. His Amano art card grants him Haste and Preemptive Attack if a Forward with either of those abilities is in the player's Break Zone, and when the player uses a Forward's special ability, Gogo gains that same ability for the rest of the turn. His SD art card allows the player to pay one Water CP, and Gogo's Power is equal to the Power of a Forward of the player's choice for the rest of the turn. A card featuring an alternate Amano art allows Gogo to use the Action Ability of any other card of the player's that has used its Action Ability the same turn, for the cost of Dulling Gogo and paying one Water CP.

In Bravely Default and Bravely Second, Mimic is an ability learned by Freelancers that allows the character to perform the same action as the previous one, whether it was the Mimic user's or another ally's. No HP, MP, BP, pg, or items will be consumed. 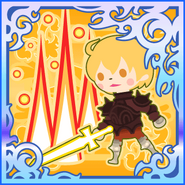 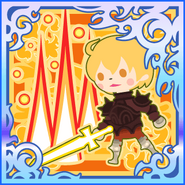 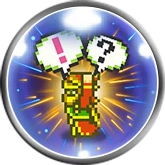