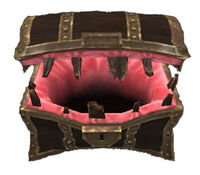 Mimics are animated treasure chests in Final Fantasy XI that strike fear into the hearts of many adventurers, thieves especially. When resting they look identical to their un-enchanted counterparts, thus leading adventurers to come to close or attempt to open them. When engaged in battle these chests bare their teeth and will attempt to take down whole parties. When defeated they will usually provide a key that can be used to open a real treasure chest in the area.

They appear as regular treasure chests most of the time. Should a Thief fail in their attempt to pick a lock, there is a chance the chest will turn into a Mimic. On other occasions, a treasure chest may turn into a Mimic simply from a player examining it. Mimics can also be encountered in Burning Circle encounters, although this tends to ruin their advantage of surprise.

Once the Mimic springs their trap, the player is forced to fight them—their Draw In ability prevents any escape. 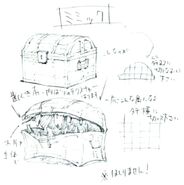