Every innate support ability from every job mastered, except the Berserker's Berserk, the Necromancer's Undead, and all Equip X abilities.

The Mime is an optional job in Final Fantasy V, found late in the game. The job has a similar role to the Freelancer, but focused more towards spellcasting. Like Freelancer, it inherits stat and support abilities from the jobs the character has mastered; unlike Freelancer, it has an additional third ability slot, and lacks the Freelancer's infinite weapon selection. This makes it geared towards equipping multiple magic skillsets. Mime also learns the ability Mimic, a potent ability that can copy the last move an ally used in battle.

The job is earned in the merged world where the player can take the submarine south of the Phoenix Tower desert and dive to find the sunken Walse Tower. At the bottom, the player can find a shard of the Water Crystal. Defeating Famed Mimic Gogo earns the Mime job. The player has seven minutes to complete this.

Mastering Mime for all four characters in the now defunct mobile and Steam versions earns the achievement "Master of Mimicry".

The Mime job looks the same as the Freelancer, except each character wears spaulders and a cape. Each party member sports a different color: Bartz red (blue in the defunct mobile/Steam version), Lenna green, Faris yellow, and Krile pink.

It is best to master Monk, Thief, and Summoner on all characters who will use Mime. Even though Monk and Thief are mostly physical fighter jobs, increasing Stamina is a great survivability boost, and increasing Agility will greatly help Mimes as turn rate increases help with spellcasting. Though it does not strictly affect stats, mastering Samurai can also greatly help survivability by providing the Shirahadori support ability, giving a 25% chance to block a physical attack before Evasion is considered. Those who do not wish to grind to master Monk or Samurai can instead grind Berserk for a slightly smaller Strength and Stamina boost, and for much less APB.

Mimes only learn the ability Mimic, and the job has only one level. Mimic is learned for 999 AP, at which point it can be used by any job. However, it is very unlikely that the player will use Mimic on any other job.

Mimic grants the ability to repeat the previous action an ally took in battle with no MP or item consumption.[note 1] Even Defend or automatically triggered actions like Counter or Magic Shell are mimed. The mimed action is repeated on the same target where possible, though abilities that target self, like Guard, simply have the mimer use it on themself. Miming an item use, Throw, Mix, or Combine does not consume materials, but miming Zeninage still spends gil. Miming Animals, Dance, Call, or Gaia will still result in a random action. The mimed action depends on the Mime's stats, not the character they are mimicking.

The Mime has three free ability slots. If the character has no abilities equipped, they only have the Mimic command, meaning simple commands like Attack and Items must be equipped to be able to be used. Normally, the best option is to equip Dualcast and two magic commands. Mime is the best job for spellcasters end-game, since they can equip two sets of spells along with Dualcast instead of one.

The Blue Magic Goblin Punch is the same as Attack for most purposes, and costs no MP. With the Equip X and Attack commands, the Mime will become a battle Mime. If the player has learned Aim, Mug, Open Fire, or Mineuchi, they can be used instead of Attack, since they act the same with added bonuses. Rapid Fire can also go in this slot. Focus can be used as well, although using it takes some time.

The Mime, just like the Freelancer job, gains every innate support ability from every job the character has mastered, except the Berserker's Berserk, the Necromancer's Undead, and the "Equip X" abilities.

Because the job is obtained after he is no longer in the party, the developers did not create a Mime sprite for Galuf on the Super Famicom, having left the sprite sheet for the Mime job blank within his job graphic data. By using a cheating device to obtain the Mime job early, players who make Galuf use it will render him invisible.

For the Game Boy Advance version, the developers assigned two of Galuf's Freelancer sprites on the job menu, the standstill and victory sprites, but he will still be invisible if the player uses it during battle. However, artwork and a bitmap image were created for Galuf as a Mime at an early stage of development, as shown in the 25th Anniversary Memorial Ultimania. 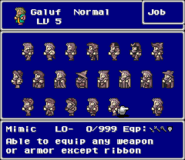 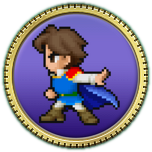 [view · edit · purge]A mime or mime artist is someone who uses mime as a theatrical medium or as a performance art, involving miming, or the acting out a story through body motions, without use of speech.