A hammer from another world. Imbued with the power of lightning, it also boasts decent ATK. In the world it originally came from, this weapon is said to have only been able to have been used by those who have mastered the job of "viking," riders of the rough seas. Only able to be produced by those known as legendary smiths, they are very rare and even more valuable.

Mighty Hammer (マイティハンマー, Maitihanmaa?) is a recurring weapon in the series.

Mighty Hammer is the most powerful hammer in the 3D remake, providing 145 Attack, +20 Vitality, and is Lightning-elemental. It can only be equipped by the Viking class, and can only be obtained by leveling a Viking up to level 99 and then talking to the Legendary Smith.

Mighty Hammer is a Hammer obtained during the Final Fantasy III event, The Crystal Tower. It provides 72 ATK, HP +15%, and is Lightning-elemental. 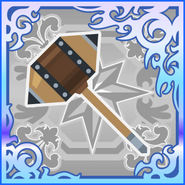 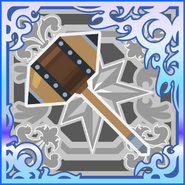