Think I'm going down that easy?

The Midlight Reaper is a boss in Final Fantasy XIII. It is encountered by Sazh and Vanille at the Clock Tower in Nautilus Park.

The Midlight Reaper attacks individual targets, and can use Nerve Gas to inflict Poison on the party. After using Release Arm Restraints, it instead uses a stronger area attack and can charge up a powerful Railgun for use against a party member.

The Midlight Reaper is vulnerable to Imperil, however, as it is already weak against the Fire and Ice elements, Deprotect should be prioritized instead. Sazh should cast Haste on both party members, then either Enfire or Enfrost on himself in addition to Bravery, and switch to the Slash & Burn (COM/RAV) Paradigm for the main offense, utilizing Blitz for massive damage.

Despite the boss's fearsome appearance, it is not too difficult to defeat, as it can be Staggered quickly. Poison can be cured with antidotes or Esuna, if Vanille has learned it as a Medic, though the damage isn't too concerning. 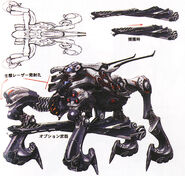 Railgun.
Add a photo to this gallery

[view · edit · purge]A reaper is a farm tool or machine for harvesting grain. It comes from the word "reap," which means "to take" or "to cut", due to the association with the Grim Reaper.

Retrieved from "https://finalfantasy.fandom.com/wiki/Midlight_Reaper?oldid=3352905"
Community content is available under CC-BY-SA unless otherwise noted.