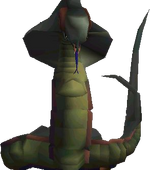 Midgar Zolom appears in the swamp by Mythril Mine next to the Chocobo Farm. When the player first gets to this point in the game, the Midgar Zolom is difficult to defeat, so it is easiest to avoid it by crossing the swamp on a chocobo. Midgar Zolom will usually flick a party member out of battle, who will be alive on the side of the swamp if the other party members are KO'd preventing a Game Over. Midgar Zolom uses the E.Skill Beta. 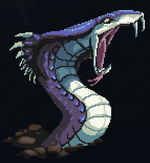