It's a serpent-like creature over 30 feet tall!! It picks up on footsteps that enter the marshes... And then, BAM!! It attacks!!!

The Midgar Zolom is a species of giant serpent in Final Fantasy VII that dwells within the marshlands leading to the Mythril Mine. It uses and can bestow the Beta Enemy Skill.

The Midgar Zolom appears as a gray serpentine shadow gliding across the marsh. Riding a Chocobo is fast enough to outrun it, although this can also be done on foot if the player is precise. After traversing the swamp for the first time, the player enters a one-time field location, named Marshes, where a Midgar Zolom is impaled on a tree, leading the party to speculate the feat was done by Sephiroth. If the player enters the menu the moment the scene is about to play, they can skip it.

If the party battles Midgar Zolom, they must kill it to proceed. If they flee, they are transported back to the edge of the swamp. Midgar Zolom can eject someone out of battle; this will not flag them as defeated, and because that person is still alive, it is not a Game Over even if the other characters die, and the current party leader will appear on the edge of the swamp. Even if killed, the Midgar Zolom quickly respawns to begin chasing the party again.

The player can easily avoid the snake when riding a Chocobo across the marsh (caught from the Chocobo Farm area with the Chocobo Lure equipped). Due to the configuration of the marsh area, it is possible, though difficult, to also outrun the creature on foot in either direction. From the Chocobo Farm side, it can be done starting from the point furthest out into the marsh, with the Midgar Zolom to the left and slightly behind the player. From the Mythril Mine side, the player must wait until the Midgar Zolom is moving away and towards the far right side of the swamp (from the point of view of having exited the mine). If timed well, the player can avoid the Midgar Zolom and run past it.

The player can also use a save game exploit by starting to cross the swamp, and when the Zolom's shadow is about to attack, the player can save the game, exit and reload, and Midgar Zolom will spawn on the other side of the swamp.

When the battle begins, Midgar Zolom only uses its physical attack, Bite. The attacks are powerful and can kill or severely weaken a character, but they can fill a character's Limit Break meter quickly.

Midgar Zolom has three other abilities it will begin using when its HP drops to certain thresholds, two of which it will perform as counterattacks in response to direct attacks. If it takes direct damage when below 3/4 HP, it will use Change and uncoil, rising into the air. In this state it can use Blown Away to remove a party member from battle, and can use it twice per battle. Characters that are pushed out will have the Fury and Sadness status effects removed.

If Midgar Zolom takes direct damage when below 3/8 HP, it will use the powerful Beta attack inflicting approximately 1,000–1,200 Fire-elemental damage on the entire party. It uses Beta once per battle.

Using the Sense is recommended for determining Midgar Zolom's current HP if it is poisoned, as the damage display may be off-screen during attack animations, and Poison may hit twice per round.

If damaged only by Poison, Midgar Zolom will not use Beta, and may not eject the party or stand up.

Elemental Materia connected to a Fire Materia in armor will halve Beta's damage. Fighting in the back row and using Defend each halve Bite's physical damage; both together bring it down to 80 or so. Using a Tranquilizer to put characters in Sadness reduces both physical and magic damage by 30%. Combining these on a party member and giving them Cover lets the divert damage from the other party members onto themselves and tank it.

The Spirit stat (and thus the Talisman) reduces the magic damage from Beta (the Magic Defense stat does nothing in pre-2012 versions of Final Fantasy VII); armor Defense and the Vitality stat (and therefore Protect Vest) reduce physical damage. Characters' HP gain at level up is random within a given range; given his HP rises high enough each level, Barret can survive Beta at level 11, using the above tactics.

The Poison damage from Bio or Deadly Waste gives the player plenty of time to time attacks; Midgar Zolom takes 125 HP of poison damage per round. Dealing Gravity damage is even faster. If Gravity or Laser are unavailable, the party can use any Graviballs they may have won from Deenglows in the Train Graveyard in the Midgar Slums to do heavy damage.

Poison damage can kill the Midgar Zolom immediately after using Beta if the provoking strike is carefully timed to knock it below 125 HP. Poison status, and the three attacks, at 3,000 HP, 2,000 HP and low HP, are all that is required to both kill the Midgar Zolom and make it cast Beta. This sequence is recommended for low level parties, as it can Push (eject a character) twice, Push then Beta, Push then Bite, not cast Beta at all, and all manner of other inconvenient combinations, if other sequences of attacks are used.

If the player wishes only to kill Midgar Zolom and prevent it from casting Beta, poisoning it only, with no further attacks, will ensure it does not cast it. Barret can also drain Midgar Zolom's MP with his Mindblow Limit Break to prevent Midgar Zolom from using Beta. The same feat can be accomplished with Magic Hammer later, though fighting Midgar Zolom will not be such a challenge by the time it becomes available.

Surviving Beta at the lowest possible level relies on it missing altogether. Given enough attempts, this can be achieved by giving a character a command to use a Hyper and confusing them with Loco weed before the Hyper is used, whereupon they have a chance of using Hyper (which cannot normally be used on enemies) on the Midgar Zolom, inflicting Fury. This gives a 15.37% chance of Beta missing altogether.

If the player is trying to obtain the Beta as Enemy Skill, they must ensure the character who holds the Enemy Skill Materia both survives the attack and wins the battle. The simplest way to do this at low levels is to equip an Elemental Materia in a linked slot with a Fire Materia to reduce Beta's damage to approximately 600, allowing a character with high enough HP to survive it. However, it may use bite or push immediately after and kill the surviving party member.

The character can then cast Beta to kill the Midgar Zolom and end the battle with Beta learned. The player must be sure, however, that the character with this set-up does not attack once the Midgar Zolom rises into the air, so it is less likely to eject them, and focus on the other two characters for offense.

Aeris's level 3 Limit Break, Planet Protector, makes the party invincible; using this at the right time can ensure the party survives Beta. The Fire Ring from Costa del Sol, equipped on the character holding the Enemy Skill Materia, nullifies all damage from Beta (and potentially allows the player to counterattack with Beta).

Due to its respawning and automatic attack, Midgar Zolom can become a target of automated leveling for high level parties, with an auto-fire controller and Final Attack—Revive or —Phoenix combinations, limited only by available MP. 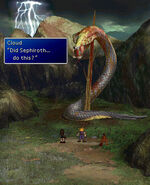 "Midgar Zolom" is an artifact of Final Fantasy VII's spotty localization. "Midgardsormr" is usually rendered in the series and elsewhere correctly as ミドガルズオルム (Midogaruzuorumu?); however, as ウ (u?)-column katakana, along with ト (to?) and ド (do?) for /t/ and /d/, are used to transliterate bare consonants in other languages, the translator working on this section of the game likely did not realize the mythological connotation and attempted to transliterate the name directly from the kana without further context. The serpent being found near the city of Midgar (which, in Japanese, is meant to be part of the pun and reference) likely led to the final result.

"Midgar Zolom" is further in error as, even if setting aside ミドガルズオルム being correctly translated as Midgardsormr in other games, the original Japanese word does not possess the interpunct (中黒, nakaguro?), which is necessary to indicate that the proper noun being transliterated is two separate words; i.e., "Midgar Zolom" should be ミドガル・ズオルム in Japanese, with the interpunct in between the words.