The Midgar Wasteland is a desolate area surrounding the city of Midgar and, later, the city of Edge, in the Compilation of Final Fantasy VII. Barren of flora due to the siphoning of the Planet's life energy in Midgar, the area is a wasteland.

In Crisis Core -Final Fantasy VII-, Zack and a mako-poisoned Cloud escaped from confinement in the Shinra Manor basement, and a year later made it to the Midgar Wasteland where Shinra soldiers ambushed the two. Zack set Cloud down so he could fight the soldiers, but was gunned down and left for dead, while Cloud escaped unharmed.

Cloud dragged himself to his dying friend, who presented him with the Buster Sword and announced him as his "living legacy", before passing away. Zack's death, his mako-poisoning delirium and the experiments he had endured at Professor Hojo's hands in the Shinra Manor altered Cloud's psyche, and his memories were warped, placing himself in Zack's shoes in most of them. Cloud made it to Midgar alone, believing himself to be an ex-SOLDIER.

In Final Fantasy VII: Advent Children, two years after Meteorfall, the now rusted Buster Sword marked the spot where Zack died. Cloud was in the wasteland listening to a voicemail left by Tifa on his phone, before he prepared to return to Edge, unaware that he was being watched by the Remnants of Sephiroth—Kadaj, Loz and Yazoo. Believing Cloud to know the location of their "mother", Jenova, Kadaj summoned Shadow Creepers to ambush Cloud while Loz and Yazoo chased him on their motorcycles. Cloud fended off the brothers and the Creepers with his Fusion Swords, and Kadaj called off the ambush to seek his answers elsewhere.

In Advent Children Complete, after the reborn Sephiroth and his remnants had been felled and Geostigma had been cured, Cloud returned to the Midgar Wasteland to retrieve the Buster Sword, polishing it and placing it on display in the Sector 5 slums church. Yellow flowers bloom on the spot where the sword was kept, with Cloud telling Denzel the spot was not a grave but a place where a hero began his journey.

In Dirge of Cerberus -Final Fantasy VII-, after disrupting a Deepground raid at Kalm, Vincent Valentine was recruited by Reeve Tuesti to assist the World Regenesis Organization (WRO) in freeing the city of Edge from a similar attack. After receiving a message from Weiss the Immaculate, declaring Deepground was going to purge the world, the WRO convoy on route to Edge was attacked and Vincent was forced to traverse the Midgar Wasteland to reach the city.

Five hundred years later, the wasteland was no more, having been taken over by lush vegetation, while Red XIII and two cubs arrived on a precipice overlooking the Midgar ruins.

When fighting Whisper Harbinger inside the Singularity, Cloud, Tifa, Aerith, Barret, and Red XIII witnessed what appeared to be visions of the future, Red XIII looking over the now lush Midgar area from a precipice above among them. The visions of the future convinced the party to try change it, however, and they destroyed the Whispers, seemingly altering destiny's course. In an unknown place and time, Zack survived his "final stand" and took Cloud to Midgar through the Midgar Wasteland.

Yuffie Kisaragi left Midgar after her failed mission to nab Shinra's "ultimate materia". Meanwhile, Cloud and his friends walked through the wasteland toward Kalm before hitching a ride from Choco Billy.

This section about a location in Dirge of Cerberus -Final Fantasy VII- is empty or needs to be expanded. You can help the Final Fantasy Wiki by expanding it.

The Outskirts of Midgar can be bought from the cash shop as a premium stage and contains the following premium enemies:

This section about a location in Final Fantasy All the Bravest is empty or needs to be expanded. You can help the Final Fantasy Wiki by expanding it. 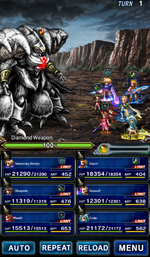 Midgar Wasteland on the world map.

[view · edit · purge]A wasteland is land that is uncultivated or barren.