A three-tiered superhighway that encircles Midgar and offers a way in and out of the city. The top road of the expressway is still under construction and not yet open to the public.

Midgar Expressway, also known as Midgar Highway, is a location in the city of Midgar in the Final Fantasy VII series. It is classified as a part of Sector 0.

After falling into the Sector 5 Slums and meeting with Aerith, Zack Fair is called back to the Shinra Building that is under attack. He emerges on the Midgar Highway and makes his way toward the headquarters.

After rescuing Aerith and Red XIII from the Shinra Building, the party escapes via Midgar Highway. Cloud blasts through a window of the building riding a Hardy-Daytona onto the highway while the others follow on a pick-up truck. Shinra soldiers riding motorcycles give chase and shoot at the pickup truck while Cloud hinders them by ramming into them with his Hardy-Daytona and swinging at them with his Buster Sword. The highway comes to an end at the edge of Midgar in a seemingly unfinished portion. The party is cornered by a Motor Ball, and after defeating it the party abandons their vehicles and slides down a rope to the Midgar Wasteland to continue on to Kalm.

The highway is largely abandoned, but still usable. Cloud rides his Fenrir motorcycle to Midgar on the highway while being pursued by Loz and Yazoo. Reno and Rude rig a portion of the highway with bombs and detonate them on Loz and Yazoo, destroying much of it.

In "The Nightmare Beginning Anew", upon escaping the Shinra Building on the Hardy-Daytona, Cloud must defend his friends' car from the Shinra forces' onslaught. He can use his weapon to attack nearby enemy bikers:

attacks left. The player can also attack enemies by ramming into them. There are two types of bikers whose AI differs slightly: the orange bikers immediately attack the truck and the red bikers try to drive Cloud away from the car. The original PC version also introduced a third, blue biker variant. The best strategy is to quickly dispatch bikers as they appear on the screen and to go for a domino effect when a group of bikers draws close.

Cloud's friends begin the battle against Motor Ball with the HP they have left at the end of the minigame when the highway ends. If they are KO'd during the minigame, they will be revived with 1 HP, but will soon perish as Motor Ball always attacks first.

The minigame can be replayed at the Gold Saucer's Wonder Square later, now named "G Bike".

Following this, the Expressway has a brief field map seen at the start of "The Turning Point", containing a bench and vending machine. The map lists the area as "End of the Road", under the level "Highway". At the end of the map, all four characters can be interacted with for dialogue before an option to enter the Singularity, where the majority of the final quest takes place.

Zack faces a G Warrior on his way to Shinra Headquarters.

The original version from Final Fantasy VII is included in the Final Fantasy XV music player. It is the tenth track of the Memories of FFVII album that is available by default.

"The Chase" returns in the remake as "Midgar Expressway" with an more metallic-type track and includes a male voice "singing" along with the music during later parts. The track also includes parts from "Opening - Bombing Mission", "Let the Battles Begin!", and "Fight On!".

Cloud rode the highway on his Hardy-Daytona in the remake of the Final Fantasy VII minigame for mobile platforms.

Cloud's team escapes from the Shinra Building on stolen vehicles and races down Midgar Highway with Shinra soldiers in hot pursuit.

Beneath the Midgar Highway in an FMV from Final Fantasy VII. 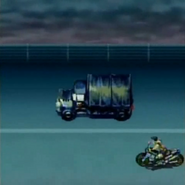