Cid Pollendina: Oh, shut up and help me remodel the Mideel page!
Please expand this article into a full one. The following tasks need to be completed:

Mideel is a hot springs town in the Mideel Area in Final Fantasy VII, known for being a place where the lifestream is close to the surface. It is located on a large island south of the eastern continent.

The party comes to Mideel to search for their lost leader, Cloud Strife, without even knowing if this person they have journeyed with since the events of Midgar is even the real Cloud, or just another Sephiroth Clone. Their lost comrade was last seen falling into the lifestream at the Northern Cave, but since Mideel is close to the lifestream, the party figures there is a chance Cloud might have surfaced there.

Cloud is found in the doctor's clinic. He had washed ashore a week earlier, but is in the vegetative state due to mako poisoning and all he can do is sit in his wheelchair and mutter incoherently. Tifa Lockhart stays with him, while the rest set off to fight Shinra Electric Power Company for the Huge Materia, with Cid Highwind taking over the leader's role.

The town is shaken by a series of earthquakes when the party returns to check up on Cloud and Tifa. Ultimate Weapon appears in the sky and the party battles it before it flees. A flow of lifestream swallows the town and Cloud and Tifa are pulled into it where the two explore Cloud's Subconscious to unearth his true past and identity. They wash ashore and the others find them and take them aboard the Highwind, the recovered Cloud returning to the role of leader.

Mideel is located to the South on Gaia's South-Eastern island mass.

Referred to as "Mideel, House1" in the menu.

A good early level grinding spot is by taking the Tiny Bronco to one of the Mideel Area islands to fight enemies in grassland, dirt and beach areas designed to be fought part way through Part 2 of the game.

The player can find a Curse Ring in town before it is destroyed. Examining the back door of the Weapon Shop makes a key available to be picked up just outside the Accessory Shop; the "Beat-Up Useless Old Key" is on the wooden pathway adjacent to the shop where a screechy sound effect plays when stepping on it. The pathway is behind the silver-haired old woman in purple clothing (she mentions a kid who got a green stone from a Chocobo). Using the key on the back door of the Weapons Shop, and choosing "Tell them the truth!", earns a Curse Ring.

A small white chocobo follows the busy shopper found in all the shops (except the accessory shop) before Mideel's destruction and on the ledge on the very left side of village post-destruction. Giving it Mimett Greens (can be bought from the Chocobo Farm) and scratching it behind its ears nets the Contain Materia. After the player obtains the Contain Materia, the white Chocobos will not give away any more items.

Before the town's destruction the player can find a crazed consumer in all the shops (except the accessory shop). Post-destruction (after the mandatory battle against Ultimate Weapon) the other shops lose most of their stock, but the previous crazed consumer will sell the party the previously available weapon shop stock at the same price, and after viewing either the Materia store (young girl) or Item store (man) she will also sell offer the item and weapon stock.

When spoken to in his delirious state, Cloud will mutter on about Xenogears, another RPG that was in development at the same time as Final Fantasy VII. Xenogears also includes a reference to Final Fantasy VII by displaying a poster of Tifa in one of the in-game areas.

According to Final Fantasy VII Ultimania Omega[1], Cloud's rescue scene was originally planned to be even longer; after washing up on the shore of Mideel with Tifa, Cloud would have been unconscious and Tifa would have had to revive him with CPR. During this stage Cloud would have a vision of being experimented by Professor Hojo in Nibelheim, and of his escape with Zack. The scene was moved to be viewed in the Shinra Mansion basement in the game's final version. 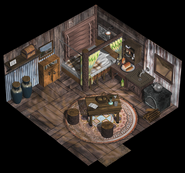 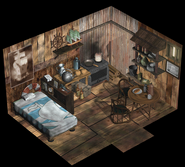 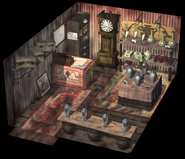 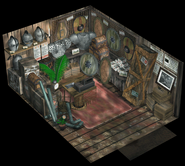 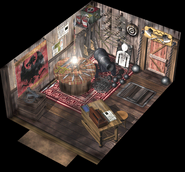 Mideel falling into the Lifestream FMV.

The party on the shore in Mideel after Cloud and Tifa return.

Mideel is a mistranslation of Midir, a god in Irish mythology.