Cid Pollendina: Oh, shut up and help me remodel the Mi'ihen Highroad page!
Please expand this article into a full one. The following tasks need to be completed:

This is a statue of Lord Mi'ihen. Eight centuries ago, he founded a legion known today as the Crusaders. In just a few short years after their founding, their ranks grew throughout Spira. The maesters of Yevon feared an uprising and accused them of rebellion. So Lord Mi'ihen walked along this very road to go face their charges and refute them. He succeeded in winning the maesters' trust, and his legion became an arm of the Yevon clergy.

The road was named for Lord Mi'ihen, the founder of the Crusaders, then called the Crimson Blades, who walked the old path on his way to Bevelle to answer the challenge that his group was a threat to Yevon. It is called a highroad because of both its altitude in relation to Luca, and because Mi'ihen walked the "highroad" when he decided to face the maesters of Yevon instead of antagonizing them.

Five hundred years ago the highroad was destroyed by Sin, and a new road was constructed to its place. The old highroad became known as the "old road".

Some time before the events of Final Fantasy X, in the place of the travel agency, there was a manor where an elderly couple lived caring for their flower. At some point they were killed by a female servant for gil.[1]

The highroad is home to many fiends. People who need to cross the highroad generally travel by chocobo, as it is safer than dealing with the fiends. Even the chocobos are not entirely immune to the fiend activity, as the Chocobo Eater roams the area. Yuna and her guardians defeat this monster on their way through. While staying at Rin's Travel Agency, Yuna makes a sphere recording to leave to her guardians to view after she has gone through with the Final Summoning, but Tidus interrupts her, and the two sit outside in the sunset and talk for a bit.

Reaching the northern end of the highroad, the guards forbid the party from passing until Seymour Guado tells thm to permit Yuna's party to pass.

After the defeat of Sin, people have stopped riding chocobos in favor of hovers. The Gullwings can help Calli catch a chocobo, and if they're successful, they have to rescue her from a Chocobo Eater. If the party arrives just in time, they defeat the fiend and Calli is able to ride a chocobo. They can invite both Calli and her chocobo to the Celsius.

In Chapter 3, the Al Bhed machina suddenly go haywire, and the Gullwings and the Al Bhed need to destroy them. In Chapter 4, Rin asks Yuna's help in his investigation in finding the culprit. If the party helps, the culprits are either the Chocobo Eater, Rikku, Calli, Prophet, or Rin himself.

This section about a location in Final Fantasy X is empty or needs to be expanded. You can help the Final Fantasy Wiki by expanding it.

This section about a location in Final Fantasy X-2 is empty or needs to be expanded. You can help the Final Fantasy Wiki by expanding it.

The Fiend Colony is an optional dungeon in Final Fantasy X-2. The player must dispatch a level four or five chocobo to the highroad from Clasko's Chocobo Ranch during Chapter 5 to access it. Once it returns, Clasko will report a new dungeon has been found and the player can enter the colony. The entrance appears as a green portal.

The Mi'ihen Highroad Mystery takes place during Chapter 4. Rin asks Yuna, Rikku and Paine help him investigate two separate incidents that occurred on the Mi'ihen Highroad; a hover crashing on the Oldroad and the sentry machina going haywire. The culprit is either the Chocobo Eater, Rikku, Calli, Prophet, or Rin himself.

Sending a chocobo to Mi'ihen Highroad to look for treasures finds the following items (depending on the chocobo's level):

Sending a level 5 chocobo to Mi'ihen Highroad may uncover a new dungeon.

Cuckoo for Chocobos! is a mission in Chapter 2.

Your Mission: Catch the Chocobo for Calli! Follow Captain Rikku's instructions and bring that winged whirlwind to justice! It's the kwest of a lifetime!

Machina Mayhem is a mission in Chapter 3.

The machina deployed along the Mi'ihen Highroad have started attacking innocent people. Take out the misbehaving machina and restore peace to the Highroad!

The chocobos are back on the Highroad and running free!

Mi'ihen Highroad highlighted in the locations list on board the Celsius.

Three possible scenarios here will result in an Episode Complete: the Chocobo Eater, Rikku, or Calli being blamed. The rare Ragnarok accessory can be obtained by pinning Rikku as the culprit.

While it is not necessary to complete the Mi'ihen Highroad mission in Chapter 2 in order to find the Chocobo Eater guilty, skipping this mission will mean Rikku and Calli cannot be found guilty.

Well, things were hairy on the Highroad for a while, but the trouble's over... for now.

There are three possible scenarios that will result in an Episode Concluded: either Prophet or Rin is blamed, or no suspect is blamed. The player will receive the key item Gippal's Sphere, which cannot otherwise be obtained, if they name Rin as the culprit.

In Final Fantasy X, "Mi'ihen Highroad" is the location theme on the Highroad. It was composed by Nobuo Uematsu. This theme is included on Theatrhythm Final Fantasy Compilation Album and in the Final Fantasy XV music player.

"Chocobo Jam" plays when riding a chocobo on the Highroad. "They May Pass" plays at the end of the Highroad, when Seymour appears and gives the party permission to pass the roadblock.

In Final Fantasy X-2, "Mi'ihen Highroad" is an entirely new composition that acts as the Highroad's theme. The theme "Chocobo" plays while riding a chocobo on the Highroad and during the Chapter 2 mission, "Cuckoo for Chocobos!".

The Mi'ihen Highroad appears in the background for the FMS of its eponymous theme.

Auron joins the party and together they make for Djose Temple. They travel along the Mi'ihen Highroad, but encounter an unexpected problem at its northern end...

The back of Rin's travel agency on Mi'ihen Highroad.

Tidus riding a chocobo on the Highroad. 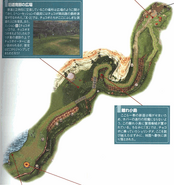