Very nimble and hard to hit. Magic defense is also high. It's vulnerable to fire- and water-based attacks, so use weapons with these elements to inflict greater damage.

Mi'ihen Fang is an enemy in Final Fantasy X found along the Mi'ihen Highroad. It is a weak wolf similar to the Dingo encountered on Besaid. It is is a red and gray wolf with a red crest on its forehead, and a long red tongue.

Its attacks can cause Sleep and Silence, unless Provoked. It can drop weapons with any of the elemental strikes, as well as Distill Power (Strength/Magic +3% in the original version). It can also drop armor with Silence Ward, Sleep Ward, and Magic Defense +3%.

Attacks may cause Sleep or Silence. 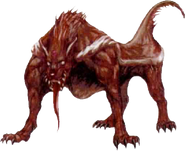 Retrieved from "https://finalfantasy.fandom.com/wiki/Mi%27ihen_Fang?oldid=3363617"
Community content is available under CC-BY-SA unless otherwise noted.